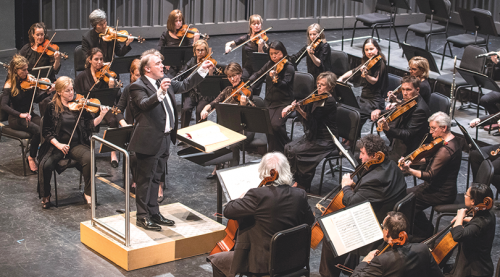 Although LACO has previously performed at the venue, acclaimed for stellar acoustics, it will be Martín’s first time conducting at the auditorium.

“It is thrilling for LACO to return to Ambassador Auditorium with an eclectic and compelling program that spotlights the orchestra itself,” Martín said. “It will also be a bittersweet evening as we celebrate the incredible musical legacy of Ken Munday, who has been an integral part of LACO helping to shape the distinctive sound of the woodwind section for more than four and a half decades. His impact on the orchestra is profound and will be felt for decades to come.”

“We salute Ken Munday for his historic contributions to LACO during his lengthy and fruitful tenure and wish him all the best in his well-deserved retirement,” LACO Executive Director Ben Cadwallader said. “This will no doubt be an emotional evening for the orchestra and our patrons.”

Munday was appointed LACO principal bassoon by Sir Neville Marriner in 1976, becoming the orchestra’s youngest principal player at the time. Marriner encouraged Munday and other principals in the orchestra to form a baroque ensemble, Musical Offering, which subsequently performed throughout the United States, Puerto Rico and Canada, and made three recordings for Nonesuch featuring music by Vivaldi, Telemann and J.S. Bach and his sons. Munday was also a founding member of the Los Angeles Chamber Orchestra Winds, and was featured on the solo bassoon part in a recording of Richard Strauss’s “Duet Concertina” with clarinetist David Shifren.

Mourners show outpouring of support at vigil for Brianna Kupfer