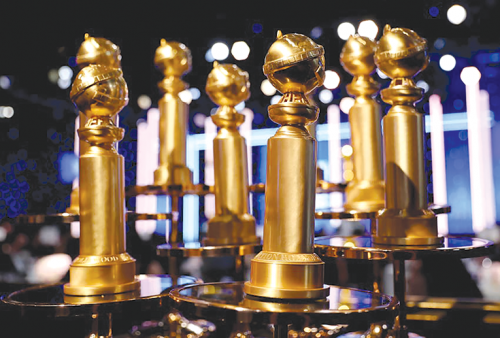 The 79th annual Golden Globe Awards were held on Jan. 9 at the Beverly Hilton. (photo courtesy of the Hollywood Foreign Press Association)

“The Power of the Dog,” “West Side Story,” “Encanto” and “Drive My Car” were among the film winners.

In addition to recognizing 2021’s best in film and television, the Golden Globe Awards shined a light on the long-established philanthropy work of the HFPA, honoring a range of grantees during the program.

HFPA president Helen Hoehne opened the ceremony and welcomed attendees composed of select HFPA members and grantees. For 25 years, the HFPA has donated more than $50 million to more than 70 entertainment-related charities, film restoration, scholarship programs and humanitarian efforts. The evening honored the achievements of the grantees as well.

“Last year the Hollywood Foreign Press Association was challenged to change – and we did – both internally within the association, as well as [by] adding 21 members to bring fresh perspectives,” Hoehne said. “We are on a journey of change, and we’re not going to rest. We are going to be outspoken about what we’re learning and challenge others to join us.”

At the conclusion of her remarks, Tige Charity, executive director of Kids in The Spotlight, took the stage to provide an overview of the organization, and then announced the first two awards of the evening.

Throughout the event, various HFPA grant recipients and nonprofit leaders spoke about the work of their respective organizations, followed by the announcement of award category winners.

“Imagination is the currency that sustains and propels the entertainment industries,” Bowser said. “Creative storytellers possess an amazing ability to conceive people, places and circumstances that transpose us all to fantastical realms of ‘make believe.’ But for many of us, the imagination of the dominant culture is the most vulnerable, unhealthy and dangerous place to reside. Our race, origin, ethnicity, gender, sexual orientation, physical capability and mental capacity are but a few of the unique qualities we embody, but the invaluable perspectives, methods and talents we offer are routinely discounted or discredited.”

Bowser added that attention “has deservedly been paid to the HFPA’s shortcomings,” but the “NAACP supports their effort to reform      and applauds HFPA’s offer to   share its transitional experience as a template for the entire industry   to emulate.”