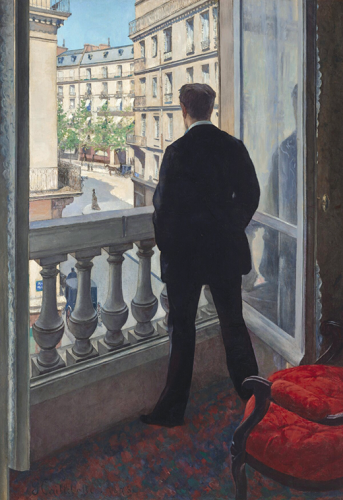 Gustave Caillebotte’s “Young Man at His Window” will be on display through Jan. 9. (photo courtesy of the Getty Museum)

The J. Paul Getty Museum’s recent major acquisition “Young Man at His Window,” by Gustave Caillebotte, will be on view through Jan.  9 at the Getty Center.

After that, the picture will undergo preservation work before installation in its permanent home in the museum’s West Pavilion.

“Young Man at His Window” will be incorporated into the ongoing exhibition “Getty Highlights: 19th-Century Paintings and Sculpture,” which features works by Van Gogh, Monet, Rodin and many other artists in a special presentation of 19th-century European paintings and sculptures from the permanent collection. Prompted by the temporary closure of the West Pavilion paintings galleries for renovations, the exhibition is on view adjacent to “Holbein: Capturing Character in the Renaissance,” which also remains on view until Jan. 9.

“Young Man at His Window” is a large-scale figure painting that is widely considered a masterpiece of modern realism and represents a key moment in the history of Impressionism. The Getty Museum purchased the painting in November at auction from Christie’s New York.

The painting represents a pivotal moment in Caillebotte’s early career. He achieved great acclaim at the second Impressionist exhibition in 1876, when he was 27 years old. It was his public debut as a painter, and among his submissions, the painting received the most critical acclaim, after his famous “The Floor Scrapers.”

The West Pavilion at the Getty Museum, which houses the Impressionist galleries, will reopen in late January. The Getty Museum is located at 1200 Getty Center Drive. For information, visit getty.edu.