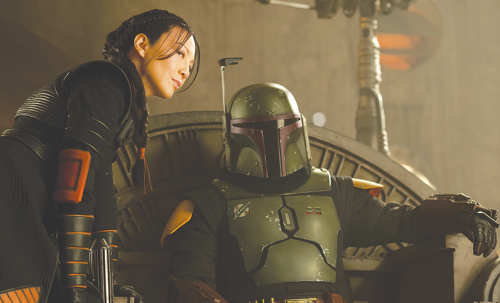 The “Book of Boba Fett” features a throwback to prophetic words from Patton Oswalt. (photo courtesy of Disney)

Years ago, comedian Patton Oswalt guest appeared on “Parks and Recreation,” providing a hilarious filibuster about the next “Star Wars” films. On Dec. 29, part of his pitch came true during the “Book of Boba Fett” pilot.

“Pan down from the twin suns of Tatooine,” Oswalt said in 2013. “We are now close on the mouth of the Sarlacc pit. After a beat, the gloved Mandalorian armor gauntlet of Boba Fett grabs onto the sand outside the Sarlacc pit, and the feared bounty hunter pulls himself from the maw of the sand beast.”

Viral videos place this speech next to the matching scene, which seems to be rather on point, everything down to “after a beat.”

Season one of Netflix’s “The Witcher” earned itself quite the following, but those eight episodes sure took their time to find a plotline. Come season two, Henry Cavill’s Geralt of Rivia enjoys many more epic monster battles across a season that, while meandering at points, better spends its time locked in compact and exploring mystical sides of this realm and others.

“Dune: Part 1” might be a bit slow for some folks, but what it lacks in pulse it compensates for in eye candy. “Blade Runner 2049” director Denis Villeneuve lives for uncanny displays only available on other planets.

For an episode, Hulu’s “Only Murders in the Building” – starring Steve Martin, Martin Short and Selena Gomez – goes nearly silent, relying on visuals and text messages to tell the story. It’s unlike the rest of the series, and a thoughtful piece of storytelling that proves televisual content need not feel stuck in tiresome patterns.

While “Star Wars: Visions,” an anthology anime series on Disney+, received plenty of praise for expanding what a “Star Wars” story can look like, only one of the nine entries deserves high praise. “The Duel” rocks some major Akira Kurosawa aesthetics, simultaneously reminding us of what we already knew but never said aloud – a red lightsaber almost exclusively accompanies a Sith lord – and those beaming lances look so much cooler when unsheathed like a traditional sword.

“Barb and Star Go to Vista Del Mar” knows its way around some cooky gags, landing a sea of silly jokes. Yet one innocuous moment stands out. Following a montage of Barb’s (Annie Mumolo) solo vacation romps, including a drum circle, hot coal walk barefoot and landing a sick jump with a cruising motorcycle, she falls whilst changing into an outfit that hides the day’s events from bestie Star (Kristin Wiig).

To help her up, a mysterious man later revealed as Tommy Bahama (Andy Garcia) offers a smitten Barb aid saying, “take my calloused hand.” Why does that line land so well? Not sure, but it’s incredibly quotable.

The front end of “WandaVision” slowly establishes a mystery across TV sitcom history. But when the story transitions, a gripping saga unfolds, all culminating in Wanda Maximoff’s (Elizabeth Olsen) first appearance as iconic comics superheroine the Scarlet Witch, with a fitting costume to boot.

To call Mike Flanagan’s limited series “Midnight Mass” a vampire story seems too simplistic, but the major reveals in episode three’s explanation of the mysterious priest (Hamish Linklater) – structured like a traditional Catholic confession – kickstart the island madness that leads down an insane path equally mesmerizing and spiritually uplifting until the end.

The House of Mouse surpassed its own subsidiary Pixar multiple times in 2021, peaking with “Raya and the Last Dragon,” the best Disney Animation film in some time (perhaps tied with “Moana” or just inching ahead).

Set in the time of legend, it somehow presents a “Mad Max” vibe suitable for wider audiences. Barren landscapes match the dire state of things, leaving plenty of room for hope to rain down.

“Latte foam art, tiny pumpkins, fuzzy, comfy socks,” comedian Bo Burnham sings in his 2021 special “Inside” on Netflix. “Coffee table made out of driftwood, a bobblehead of Ruth Bader Ginsburg.”

Following this verse and many others listing various photo-ready objects, Burnham asks, “Is this heaven or am I a white woman, a white woman’s Instagram?” It’s a clear example of too-true humor, much like his other pointed songs.

This Netflix adaption of “League of Legends” decimates all other video game adaptations, full stop. To pick one thing that works – gorgeous animation, plotting, setting, etc. – is a level of favoritism that ostracizes some when all creators involved deserve every bit of praise possible for such an encroaching adventure.

“Loki” explores entirely new corners of the MCU in clever ways, including an incredible introduction of a new character. In the final episode, Loki (Tom Hiddleston) and Sylvia (Sophia De Martino) confront their main foe, He Who Remains, expertly portrayed by Jonathan Majors. The entire interaction proves superhero media can do something new, something fresh. And all it takes is intelligent dialogue blended with a brilliant actor.

“The Mitchells vs. the Machines” will go down as 2021’s best animated feature. And the climax resolves hilariously in an epic sky battle, the Mitchells soaring atop robots to defeat a malicious, operating system. From choice of music – T.I.’s “Live Your Life” featuring Rihanna – to a host of film history throwbacks, this film gem never loses steam as the stakes continue to escalate. 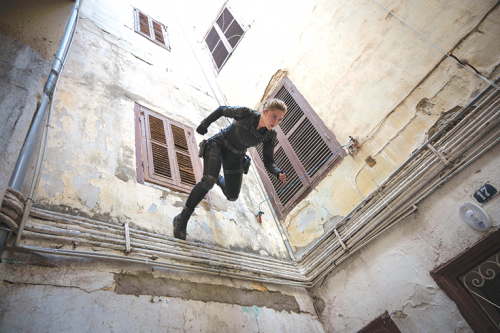 Florence Pugh as the next-generation Black Widow promises to be a formidable force in the MCU. (photo courtesy of Disney+)

The next-generation Black Widow played by Florence Pugh upstaged all in her inaugural debut last summer in a blockbuster of the same name. Then she stopped by a couple episodes of Disney+ series “Hawkeye.” Pugh’s performance is charming and hilarious, while her character promises to dominate across the MCU moving forward.

Australian animated series “Bluey” arrives stateside almost a year after initial broadcast, but each of those 52-episode seasons (around six minutes an episode) present wildly endearing parenting how-tos through a family of dogs.

“Sleepytime” takes a very different approach through youngest daughter Bingo’s adventure in trying to fall asleep, drifting between a dreamscape through the solar system juxtaposing the actual events of the night. It’s all very “2001: A. Space Odyssey” in scope, yet beautifully simple in its sentimentality.

Discover fruits of the sea at Water Grill