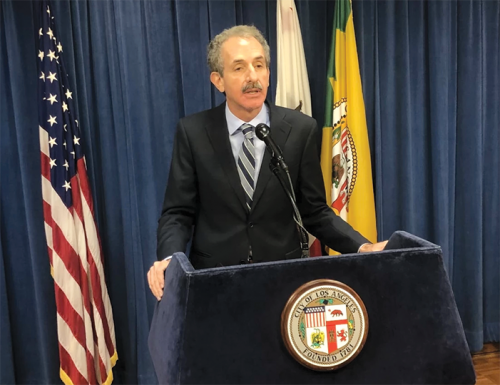 “Two-hundred-and-seventy-eight Angelenos died from gun violence last year, 1,499 were shot. LAPD recovered 30% more guns last year than the year before, 20% of which were un-serialized ghost guns,” Feuer wrote in a letter to Mayor Eric Garcetti, the City Council and Los Angeles Police Commission. “A number of specific approaches to grapple with this epidemic are in place… but as the continued increase in gun violence demonstrates, these important efforts are insufficient.”

Feuer also envisions a city/county collaboration on gun violence prevention. He said key city and county officials should meet regularly to focus on the underlying issues that contribute to gun violence in the most adversely affected communities. Feuer also called for a neighborhood solutions program. When a specific neighborhood problem persists, a citywide Neighborhood Solutions Program could bring together representatives from different departments with elected officials to work across jurisdictional lines on solutions, Feuer added.

The plans also call for immediate additional investments in gun violence intervention and interruption programs with demonstrated records of success. Los Angeles has a broad network of such programs, many of which operate in conjunction with the Gang Reduction and Youth Development program, as well as independently, Feuer said.

He also called for expanding the City Attorney REACHTM program to intervene with children confronting trauma from violence. Without timely and effective intervention, the brain development of children exposed to gun violence and other forms of trauma will be severely impeded, and they are more likely to commit acts of violence themselves as they grow up, Feuer said. To break the cycle, the City Attorney’s Children Exposed to Violence Initiative sends teams to violent incidents to provide assistance for children and families. The program also trains school personnel and parents on signs of trauma so kids can get the help they need.

Other solutions include expanding neighborhood cleanup and beautification programs, holding more gun buy-back programs and adding resources to LAPD’s Gun Unit.  Feuer said a major contributor to gun violence are ghost guns, which are created from parts without serial numbers. The LAPD recovered 1,921 ghost guns in 2021, an increase of 136% from the 813 ghost guns recovered in 2020. More emphasis should be placed on investigating the sources of the un-serialized firearms, Feuer said.

For information and to read the plan, visit lacityattorney.org.