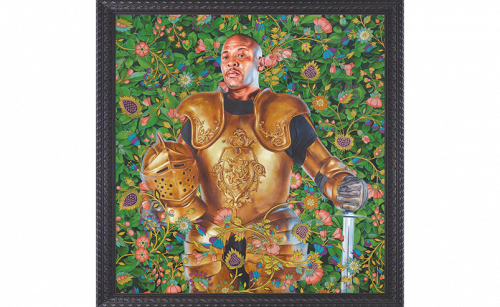 Kehinde Wiley’s “The Watcher” is one of many pieces that will be showcased at LACMA’s new installation celebrating art and music. (photo courtesy of Kehinde Wiley)

Artists often cite music as a source of inspiration, capturing the sonic experience through color and form or translating musical innovations into their own practices. In the exhibition, a diverse, intergenerational group of contemporary visual artists participate in a creative dialogue with musical artists who responded to songs and albums released by Interscope Records over the last three decades with works of their own in a range of media. The exhibition, which runs from Jan. 30 to Feb. 13, will present over 50 artworks by 46 visual artists. A majority of the works are newly commissioned pieces and will be presented for the first time to the public.

Touching on LACMA’s ongoing exploration of the intersections of art and music, the museum will present public programs exploring musical expression and movement throughout the exhibition.

“Los Angeles is a creative capital known for many kinds of art forms,” Michael Govan, LACMA CEO and Wallis Annenberg Director, said. “‘Artists Inspired by Music: lnterscope Reimagined’ is an extension of a series of LACMA exhibitions and programs celebrating the relationship between art and music.”

Interscope invited artists to select albums and songs from its catalogue and fostered exchanges with musicians to generate resonant pairings. The team worked closely with LACMA associate curator John Janick, vice chairman Steve Berman and music executive Josh Abraham revisited the label’s history of groundbreaking music through the lens of visual art, an idea that was sparked by label partner Justin Lubliner.

The installation focuses on creative pairings, visually reflecting on a history of musical innovation and powerful performances across genres. In some cases, multiple artists responded to the same musician, offering different interpretations of their work through the years. Following the conclusion of the exhibition, the artworks will be used on reissues of the record albums.