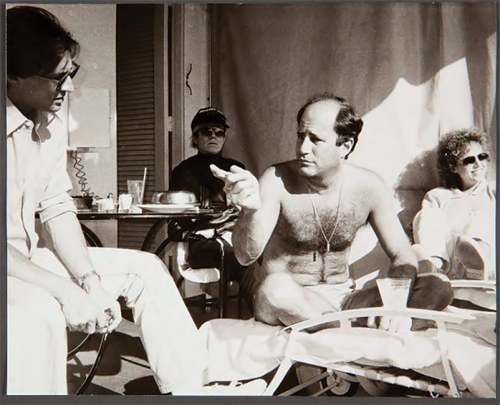 The exhibitions will be held in the Hotel Bel-Air lobby and Suite 361 from Feb. 14 to April 14. (photo courtesy of Hedges Projects, Los Angeles. © The Andy Warhol Foundation for the Visual Arts)

Guests of Hotel Bel-Air will have the chance to discover dozens of never-before-seen Andy Warhol images from the James R. Hedges IV Collection of Andy Warhol Photography – the largest collection of its sort in private hands in the world.

A prolific collector since Warhol’s death in 1987, Hedges has acquired a selection of Warhol’s photos, including hundreds of Polaroids, photo booth strips, screen tests and silver gelatin prints. In addition, Maripol has taken seven of her most notable images and produced a very limited edition in monumental scale. Drawing on her most famous images, the exhibition will showcase her most glittering subjects in a grand scale.

All Andy Warhol photos on display at Hotel Bel-Air were taken by the artist in the last decade of his life and include celebrity portraits, Hollywood stars, Studio 54 moments and still life photos. All images were acquired either from Warhol’s Estate and Foundation or from members of Warhol’s inner-most circle of confidants and collaborators, such as “The Andy Warhol Diaries” editor Pat Hackett. The show will provide a unique view into the artist’s mind and day-to-day life, as well as a heavy dose of celebrity and glamour.

Warhol was a life-long advocate of photography. As a child in Pittsburgh, the young artist had a dark room in his family’s home basement and carried a camera with him, known as “his date,” throughout most of his entire adult life. For Warhol, photography was a tool to document his own life, that of his friends and associates, and ultimately as a critical element used to create the vast majority of his art work.

In the 1950s, the artist used a hand-held Polaroid camera to memorialize his friends and social outings. Next, Warhol began experimenting with film in the 1960’s and created 16mm short portraits he called “screen-tests.” Later, his work included long-format, conceptually-driven narrative feature films including titles such as “Heat,” “Bad,” “Empire” and “Sleep.”

Well known for his use of photo appropriation from Hollywood film stills and newspapers, in the late 1960’s Warhol was sued for copyright infringement for the use of an appropriated image. From that point on, Warhol committed to using his own photographs as source material for his prints and paintings.

In the latter 1960s, Warhol would take friends, art patrons, gallery owners and anonymous people he encountered to Times Square for photo booth portraits. Removing the hand of the artist, using a machine to make art, serial repetition of the image and distancing himself from the process all became hallmarks of the artist’s practice from that point forward.

While Warhol used the Polaroid camera throughout his career, it became the primary tool from which he created prints and paintings for the last ten years of his life. During that same period, Warhol used a 35 mm camera daily and took more than 100,000 photos but printed only a fraction of those.

The exhibitions are complimentary and open to the public from Feb. 14 to April 14, seven days a week. All photos are available for purchase through the hotel’s concierge.