Discover fruits of the sea at Water Grill 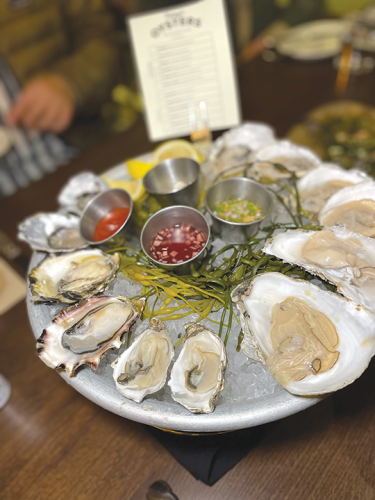 For our last meal in 2021, we dined at Water Grill inside the stunning art deco PacMutual building in Downtown L.A. The handsome restaurant on the ground floor features a beautifully carved ceiling, brass and glass doors, marble walls and comfortable leather booths. We sat among festive holiday decorations at a table for five next to the front window looking onto Grand Avenue. Since 1989, this iconic restaurant has had some notable and innovative chefs preparing fresh seafood dishes, including Michael Cimarusti (Providence, Connie & Ted’s), David LeFevre (MB Post, Fishing with Dynamite and Arthur J’s) and Amanda Baumgarten (Patina, Melisse and Ford’s Filling Station).

In a celebratory mood, we selected different craft cocktails including an Aperol spritz, gin mule, margarita verde and cider lowball to enjoy with a dozen raw oysters. We were excited to taste bivalves from six different regions. The best way to eat a shucked oyster is to use a small fork to move it around and detach the oyster in its liquid-filled half shell. Consume the oyster from the wide end of the shell because it is more aerodynamic, and be sure to chew once or twice to appreciate the distinctive flavors.

The oysters arrived on a platter of crushed ice with four different sauces: a silver container of fresh horseradish, a vinegary mignonette, slightly sweet cocktail sauce and habanero-lime relish for a kick of heat. We started with two Beach Plum half shells from Buzzards Bay, Massachusetts. The oysters were about three inches in size and similar in flavor to their sister oyster, the Riptide. Their unique minerality is achieved from growing in the nutrient-rich waters of Buzzards Bay.

Next to these were Spindrift oysters that grow large in Westport River, Massachusetts. They also offered an intense minerality and lingering finish

The two oysters from Glidden Point were premium quality, choice grade oysters cultivated in the cold Damariscotta river estuary in Maine. They feed on organic phytoplankton about 40 feet below the surface, and their rock-hard shells have deep cups holding firm, plump, briny and sweet meat.

Paradise oysters are from Baynes Sound, British Columbia, and are smaller, yet offer creamy meat and a light citrus finish. The deep and larger Fat Bastard oysters from Willapa Bay, Washington, are easier to eat fresh from the shell. These were slightly tart with a clean, crisp and sweet finish that appealed to everyone at the table. Last we tried Kumamoto from Oakland Bay, Washington, a favorite for novices and oyster aficionados. Known as “Kumies,” the oysters were fruity, offering a hint of honeydew melon flavor. The native Japanese oysters can be found in the Pacific Northwest.

Water Grill is one of the best spots in Los Angeles to enjoy an array of raw bar favorites. Almost every other table had a chilled shellfish tower featuring ocean delights. Named The Grand, The Deluxe and The King to denote size, platters can be custom ordered to include Channel Islands red sea urchin, farmed Salt Spring Islands mussels and North American hard shell lobster.

After the oysters, we ordered crisp and crunchy iceberg wedge salads topped with small cubes of bacon and blue goat cheese, before plates of wild Dungeness crab were presented. These orange-red crustaceans are plump, steamed and served with warm melted butter, cole slaw and a crab cracker. Ask for a bib to protect clothing while cracking the hard shells before enjoying the succulent, salty and sweet white meat.

Our friendly server Chris enlightened us about the length of time for the Northern California crabs to reach market size – about four months. The female crabs are left alone to continue reproducing, so it’s the mature, male crabs that are sold. 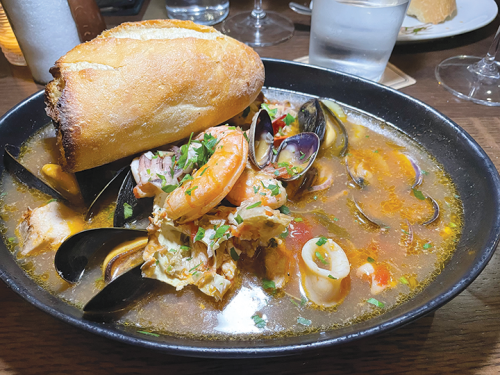 Executive Chef Jonathan Moulton and his team make some of the best cioppino in the city. Their Italian-American fisherman’s stew is a lighter version with a clear shellfish broth base. A large portion of succulent dungeness crab, multiple jumbo shrimp in their shell, fresh pieces of fish, calamari, clams and mussels fill the bowl. Almost half a loaf of the Water Grill’s crusty bread is placed on top of the steaming broth. It’s visually appealing and large enough to share with others. A protective bib is recommended before you dive in.

A selection of whole fish, like Dover sole or black sea bass, are offered nightly, either char-grilled or oven roasted and a perfect for the table to share. For those who prefer a protein other than fish, Water Grill offers two cuts of Double R Ranch filet mignon, prime New York strip steak and grilled Mary’s organic chicken.

Looking for a sweet ending, desserts include a maple cheesecake with sour cream ice cream, a slice of key lime pie and caramel bread pudding.

Dining at Water Grill is one of the most pleasing culinary experiences for seafood fans. Be sure to visit soon for spiny lobsters, now being harvested off the coasts of Santa Barbara and San Diego. The season runs through March. $$$. 544 S. Grand Ave., (213)891-0900.