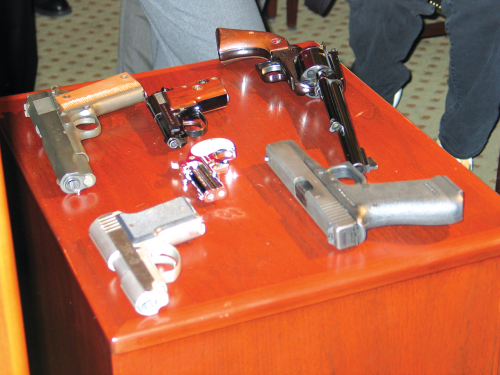 The Office of the California Attorney General has several firearm safety resources available to the public. (Beverly Press file photo)

Beverly Hills residents have been flocking to the city’s lone gun store since it opened during the civil unrest in 2020, but high-profile crimes in and around the city have led to a spree of first-time gun buyers this winter, according to Beverly Hills Guns owner Russell Stuart.

He said the tipping point for a lot of his clients – some of whom are in their 60s, 70s and 80s – was the Dec. 1 murder of philanthropist Jacqueline Avant. For a couple of weeks following her death, most of his new clients said they were terrified and wanted guidance.

“It’s so sad to see the fear in those people’s faces – just helplessness,” Stuart said. “It’s just sad, and it’s something that I never want to see. Even though I make a living from this business, I don’t want to see a 70-year-old woman coming into my shop to say, ‘I need a gun’ or ‘I feel like I’m going to get hurt.’ That is just not the environment that I ever want to see anyone live in.”

He said Beverly Hills Guns consults first-time buyers and wants them to “understand truly and fully” what owning a firearm entails.

“I want to know their capabilities – like certain people have arthritis,” Stuart added. “Certain people have other physical [restrictions]. Maybe it’s a strength thing, where they say, ‘My grandson’s a police officer and he told me to get a Glock.’ OK, well, can you manipulate it? Can you pull the slide back? Can you get the magazine out? In the end, if you can’t operate a firearm safely, it’s a danger to yourself [and] you’re not going to be able to effectively use it if someone actually breaks into your home.”

In some cases, employees of Beverly Hills Guns suggest tasers or pepper spray in lieu of firearms, he said. If clients do opt for a firearm, the business offers a gun safety consultation, Stuart said.

“As soon as you identify the weapon and get their credit card, the gun part’s over. Now, it’s all about transport, storage, safety, cleaning, handling,” he added.

Employees also give gun-buyers plenty of literature from multiple sources, including information from the gun manufacturers themselves.

Stuart said the conversation often shifts toward firing ranges, and there are some in L.A. County. However, he is looking into the possibility of opening one in the city.

Stuart wants to bring modular firing ranges to Beverly Hills. He declined to name the business specifically but referenced a company in Las Vegas that utilizes train cars to set up shooting ranges that are high-tech and can run simulations, such as a home invasion.

“That’s something that I’d like to bring to the city soon, but … it will definitely be an uphill battle,” Stuart added.

Beverly Hills Police Department Lt. Giovanni Trejo said the department would never advocate for residents to purchase weapons, but if they do, they should understand that there is a responsibility that comes with that purchase.

Trejo said the department has discussed the possibility of creating a curriculum that would teach gun safety, but it is just an idea at present.

Mayor Robert Wunderlich said he understands that residents are concerned with an increase in “certain” types of crimes regionally and nationally, but Beverly Hills continues to be an “extremely safe” city.

“I want to reassure people that we’re providing all the resources the police need – or that they asked for – to ensure that we stay a safe city,” he said.

Wunderlich cited two measures that the BHPD has implemented – supplementing officers with security guards and increasing the use of technology in its operations.

“We want to eliminate the notion that we should be a target,” the mayor said.

As far as gun ownership, Wunderlich said that is an individual decision.

“Guns are a serious responsibility,” he added. “If you own a gun, you really do have to make sure that you know what you’re doing – that you’ve been properly trained and that you’re securing it properly.”

The Office of the California Attorney General has issued a list of firearm safety tips, including how to handle and store them.

Farmers Market and Cedars-Sinai partner for blood drive from Jan. 13-15