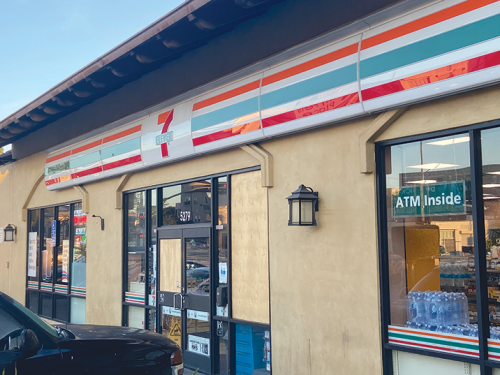 A clerk at the 7-Eleven store at La Brea Avenue and Olympic Boulevard faces a manslaughter charge for allegedly stabbing a man to death. (photo by Edwin Folven)

A clerk at a 7-Eleven store at the corner of Olympic Boulevard and La Brea Avenue is facing a manslaughter charge after allegedly stabbing a homeless man to death at the store on Dec. 29.

The clerk reported the stabbing to the Los Angeles Police Department at approximately 12:10 a.m. Officers arrived at the 7-Eleven at 5279 W. Olympic Blvd. and found the victim suffering from stab wounds. The man was taken to a hospital, where he was pronounced dead.

The name of the victim has not been released pending identification by the Los Angeles Office of Medical Examiner-Coroner. Lt. John Radtke, of the LAPD’s West Bureau Homicide Unit, said the man who died was approximately 45 years old and is believed to be homeless.

Radtke said the victim was armed with a knife when he entered the convenience store and began acting aggressively. The man threatened the clerk, identified as Chase Talape Tacanay, 24, who armed himself with a kitchen knife and stabbed the victim multiple times, Radtke added. Tacanay was arrested after being questioned by detectives.

“[The clerk] was cooperative and has been answering questions during the investigation,” Radtke said. “We took it to the D.A. because we felt he was the aggressor at the time of the victim’s death. [On Jan. 3], the D.A. filed manslaughter.”

Radtke said the clerk claimed self-defense, but stabbing the victim multiple times went beyond what is allowed by law, such as protecting yourself from an imminent threat. The knives allegedly used during the incident were recovered by police, he added.

“This is a sad story all around,” Radtke said. “But our job is to bring justice to everybody, and the D.A. felt charges were warranted.”

Tacanay is being held in custody on $2 million bail. The defendant is next expected to appear in court on Jan. 14.