City cracks down on home-sharing violations 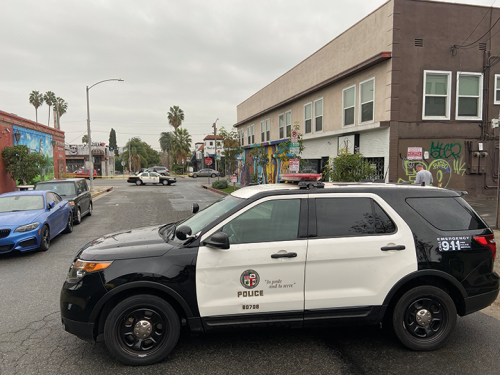 Police have been summoned to the Melrose District numerous times for violations at short-term rentals. (photo by Edwin Folven)

The Los Angeles City Council has put more teeth into an ordinance regulating house parties at rented homes. The motion amends the city’s home-sharing ordinance prohibiting property owners from re-renting residences that are under investigation for illegal house parties.

In 2018, the city enacted regulations to revoke permits at properties where repeated problems occur. However, property owners were still able to re-rent properties while investigations were ongoing or under appeal.

“For far too long, residents have been frustrated by a subset of operators that repeatedly host wild, intrusive and unsafe parties,” said Councilman Paul Koretz, 5th District, who authored the motion. “This motion seeks to add more teeth to the city’s home-sharing enforcement.”

The motion was seconded by Councilmembers Bob Blumenfield, 3rd District, and Nithya Raman, 4th District. The city’s 2018 home-sharing ordinance was spearheaded by then-4th District Councilman David Ryu, who sought penalties for property owners and people who rent homes to host parties, many of which were causing disruptions at the time in the Hollywood Hills. In the years since the law was enacted, numerous incidents have occurred at short-term rentals citywide including robberies, shootings and homicides. The COVID-19 pandemic exacerbated the problem, as people began renting homes to host parties when businesses were closed, Koretz said.

“As an example of the kinds of serious cases we would have liked to have used this for, in August 2020, we had a shooting at a short-term rental on San Ysidro Road (in the Beverly Park community in the Santa Monica Mountains). Also in August 2020 at a short-term rental on Mulholland Drive, we had a shooting that resulted in one fatality and multiple injuries. On Feb. 26 of last year, there was another shooting on Colgate Avenue in the Beverly Grove area,” Koretz added. “These parties have been a magnet for illegal activity. So this adds more teeth to our home-sharing ordinance so that bad actors are not profiting off illegal activity and inviting criminal behavior into otherwise quiet neighborhoods.”

The motion was referred to the City Council’s Planning and Land Use Management Committee and the City Attorney’s Office for a report back on the feasibility of enacting the new rules. The council has not scheduled a date for further consideration of amendments to the home-sharing ordinance.

“There should be zero tolerance for Illegal activity at short-term rentals, activity that can endanger a neighborhood and undermine everyone’s quality of life,” Feuer said. “I strongly support adding these new protections to the home sharing ordinance. The council’s action will strengthen enforcement and deter owners from renting to irresponsible guests in the first place.”

Peter Nichols, co-founder of Melrose Action, also expressed support for the changes. Nichols said parties at short-term rentals continue to be a problem in the Melrose District.

“I think this will be very helpful. These parties cause nuisance issues and they are flaunting the law,” Nichols added. “It turns these areas upside down. Some of it has led to violent activities such as murders and robberies. From the neighbors’ standpoint, this is an important step in the right direction.”

The Autry marks milestone in fundraising