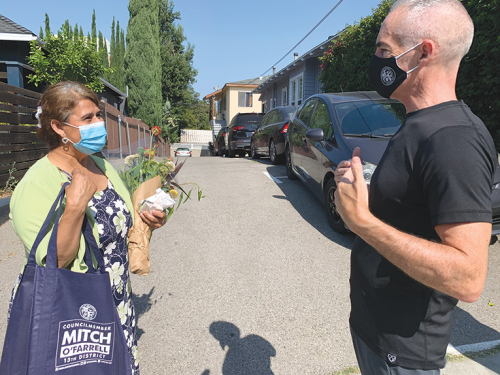 Los Angeles City Council President Pro Tem Mitch O’Farrell will meet residents and community members in the Larchmont Village, Windsor Square and Greater Wilshire neighborhoods at his next Councilman in Your Corner event on Saturday, Jan. 15, from 9 a.m. to noon at Robert Burns Park, 225 N. Van Ness Ave., at the corner of Beverly Boulevard.

The event will be the 77th Councilman in Your Corner since O’Farrell took office in 2013, but will be the first in neighborhoods that were recently moved into his 13th District under redistricting. The monthly event gives people an opportunity to meet their City Council representative, voice concerns and learn about city resources. Staff from city departments including L.A. Sanitation and the Los Angeles Police Department will also answer questions and disseminate information.

“It will be right in the heart of one of our new areas and we are super excited about it,” O’Farrell said. “It’s a nice, symbolic gesture we can make to demonstrate to everyone that we are here, we embrace representing these neighborhoods and that we look forward to meeting new constituents, answering questions and making sure people know what resources are available to them.”

In addition to monthly “In Your Corner” events, O’Farrell is in the process of meeting with residents and organizations in the new areas. He met with residents of Windsor Square in December and plans to continue connecting with other communities in the coming weeks.

The councilman said he is interested in hearing constituent concerns and cited public safety and neighborhood improvements such as tree trimming and sidewalk repair as potential topics of discussion.

Councilman in Your Corner events typically include a beautification project and a walk in which O’Farrell goes door-to-door to greet residents, but those will likely not take place this time to limit exposure between people during the surge in COVID-19 cases.

“We’ll have to play those by ear,” O’Farrell added. “Masks will be required and we will take every precaution necessary.”

Greater Wilshire Neighborhood Council president Conrad Starr said he is excited to meet O’Farrell at the event and encouraged people to attend.

“This is welcome news that the council member is taking such a proactive approach to welcoming his new constituents,” Starr said. “He’s been very responsive. We had a meeting with our new CD 13 field deputy, George Hakopiants, in December.”

Starr added that O’Farrell is scheduled to address the GWNC at its board meeting at 6:30 p.m. on Wednesday, Feb. 9.

O’Farrell added that he is looking forward to a morning of dialogue at the upcoming Councilman in Your Corner event on Jan. 15.

“I don’t want to come in heavy-handed. I want to get to know what ideas they have,” O’Farrell added. “It’s very important, especially at this time when people communicate so much on social media, that we get out of the office, out of the building and interact with people where they live and work. That’s the real world.”

O’Farrell said he plans to hold many future Councilman in Your Concert events in neighborhoods throughout the 13th District.

“We’ll be holding another one next month, so the journey continues,” he added. “I encourage people to get involved and am excited to meet them.”