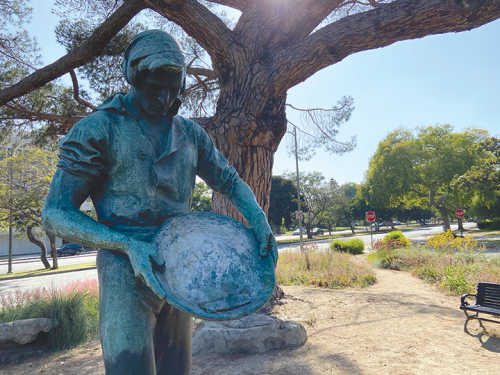 A statue of a miner representing the California Gold Rush is located in Carthay Circle Park, a centerpiece for the Carthay neighborhoods. (photo by Edwin Folven)

Residents in the Carthay Circle, Carthay Square and South Carthay neighborhoods are celebrating their communities’ inclusion on the National Register of Historic Places.

The California State Historical Resources Commission, which evaluates regional proposals for designation to the national registry, unanimously voted on Jan. 21 to include the three Carthay neighborhoods. Approximately 50 residents celebrated the designation at a party last Friday evening in the parking lot of Tom Bergin’s Irish pub on Fairfax Avenue. The approval came after two years of hard work and collaboration between the three neighborhoods, community organizers said.

“It was really exciting. I was very happy,” said Ann Rubin, a Carthay Circle resident who led the effort in her neighborhood. “It makes you appreciate your home and where you live. It makes you grateful to have a neighborhood like this.”

Walter Dominguez, who lives in South Carthay, said the idea for national registry designation was conceived in August 2020 and stemmed from a discussion he had with Brad Kane, president of the South Carthay Neighborhood Association. Dominguez said they considered ways to better protect their community from future development and decided to seek inclusion on the National Register of Historic Places.

They started seeking support and held a town hall meeting. Soon thereafter, residents in Carthay Circle and Carthay Square came onboard with the plan. The Carthay National Register Committee was formed with residents from each area, including Dominguez, Rubin and Susan Sanford, president of the Carthay Square Neighborhood Association. The committee next started creating a proposal for submission to the California State Historical Resources Commission.

The neighborhoods were approved for designation based on their example of extraordinary city planning, and that residences and buildings in the neighborhoods are architecturally significant. The Carthay neighborhoods include approximately 1,170 residences primarily built in the Spanish revival and period revival architectural styles, as well some constructed in the streamline modern style. Other characteristics of the communities include open medians and park spaces, wide streets and walking paths.

Planning for the communities was based on the City Beautiful Movement, a concept that emerged in the late-1800s and early-1900s that included streets laid out in an orderly fashion and elements such public art and statues that made communities more livable.

“Back east and in the Midwest, there was a lot of industrialization at the time and a lot of people lived in tenements in cities overcome by pollution from factories,” Dominguez said. “The City Beautiful Movement was a reaction to 19th century city development. The idea was to create open spaces and parks, and to make cities more livable. Obviously, it was an idealistic concept, but out West, they were able to build some of these things.”

The committee hired the Architectural Resources Group, a consulting company that compiled a 545-page proposal that was submitted to the state commission. The history of each individual residence and building in the neighborhoods was researched and included in the report, along with information about the history of the communities as a whole. Members of the Carthay National Register Committee went door-to-door to generate support and raised more than $100,000, which was used to pay the consulting company, Dominguez said.

The Carthay Circle, Carthay Square and South Carthay neighborhoods were developed between 1922 and approximately 1955. Carthay Circle was the first tract developed, extending between Wilshire Boulevard to the north, Olympic Boulevard to the south, Fairfax Avenue to the east and the Beverly Hills border to the west. Real estate developer J. Harvey McCarthy, who was originally from San Diego, created the neighborhood with the idea of having homes within walking distance of amenities like grocery stores, places for entertainment and businesses on Wilshire Boulevard. The name Carthay was a play on McCarthy, an effort to make the area sound prominent, Dominguez said.

The centerpiece for the neighborhood was the Carthay Circle Theatre, which was located at 6316 San Vicente Blvd. from 1926 until 1969, when it was demolished to make way for an office building. “The Wizard of Oz” premiered at the Carthay Circle Theatre in 1939. The theater’s auditorium was round, and McCarthy used the concept for the name of the new community – Carthay Circle. A small greenspace called Carthay Circle Park was created at the intersection McCarthy Vista and San Vicente Boulevard, across the street from the former theater, and remains a centerpiece of the community today. Many people may recognize the park by a statue of a miner that was placed there by McCarthy in tribute to the California Gold Rush, Dominguez said. McCarthy was enamored with California history. Today, the space is often referred to by residents as Miner’s Park, Rubin said.

As people moved into Carthay Circle in the 1920s and 1930s, the Carthay Square and South Carthay neighborhoods began to take shape. South Carthay was developed between Olympic, Pico, La Cienega and Crescent Heights boulevards, and Carthay Square was established between Fairfax Avenue and Olympic, Pico and Crescent Heights boulevards.

The three Carthay neighborhoods were each previously designated by the city of Los Angeles as historic preservation overlay zones, which prevent the demolition and alteration of existing homes and buildings without city review. South Carthay received HPOZ designation in 1985, while Carthay Circle became an HPOZ in 1998 and Carthay Square received the designation in 2017. While HPOZs provide protections, the residents sought inclusion on the National Register of Historic Places as an additional layer of protection.

Residents behind the effort are concerned that state laws may be enacted in the future that could jeopardize the character of neighborhoods, and inclusion on the national registry requires additional state review before zoning changes can be implemented in municipal neighborhoods. Organizers specifically cited potential state laws that seek to override local zoning ordinances so more multi-family housing can be added in neighborhoods. Designation on the national registry also means a federal review would be required if any future project in the area receives federal funds.

Dominguez said the designation also instills a sense of pride in the Carthay communities.

“It makes you feel like you are in a more special place,” Dominguez said.

“The conservancy was really happy to support the effort. This is a neighborhood that cares about getting what is necessary to ensure protection,” Fine said. “The collection of architecture that is there is part of what is extraordinary. It represents a prime period of development in Los Angeles.”

“It involved a hard-working team of volunteers that worked throughout the pandemic to make this happen,” Koretz said. “It’s very exciting that a very important area is not only protected at the city level, but at the state and federal levels as well.”

Dominguez added that the Carthay Neighborhoods will soon be added to the National Register of Historic Places, which can be viewed by visiting nps.gov. He said the Carthay neighborhoods’ success could serve as a model for residents of other neighborhoods seeking similar protections.

“There are open greenspaces and places for people to bicycle through or take a walk. We are not fencing this place off for ourselves. We are preserving our area,” Dominguez said.

An outpouring of support for Brianna