Audiences have a final shot to see ‘Hamilton’ 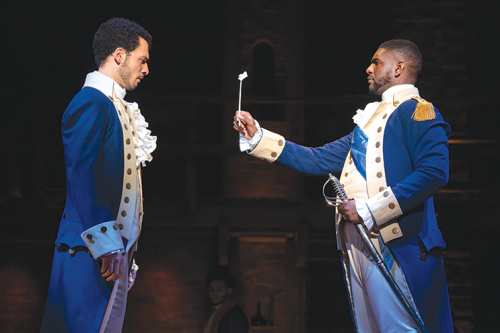 Producer Jeffrey Seller has announced that the Los Angeles production of “Hamilton” will conclude its more than 6-month engagement at Hollywood Pantages Theatre on Sunday, March 20.

“For all of us, the road to getting performances of ‘Hamilton’ up and running for our audiences was a true demonstration of that timeless adage the show must go on,” Hollywood Pantages Theatre and Broadway in Hollywood General Manager Jeff Loeb said. “The combination of hard work, a commitment to health and safety, clear communication and positive thinking were the key elements that helped all of us execute a successful reopening of our theater and this glorious production. We commend our community of theatergoers, actors, stagehands and ushers who helped us raise that curtain, and who will help keep that curtain up in Los Angeles as new Broadway entertainment continues to grace our stage.”

“Hamilton” is the story of America’s founding father Alexander Hamilton, an immigrant from the West Indies who became George Washington’s right-hand man during the Revolutionary War, and was the new nation’s first Secretary of the Treasury.  Featuring a score that blends hip-hop, jazz, blues, rap, R&B and Broadway, “Hamilton” is the story of America then, as told by America now.

The Hollywood Pantages Theatre is located at 6233 Hollywood Blvd. Tickets for “Hamilton” start at $39 and are available by visiting BroadwayInHollywood.com/HamiltonLA.