Arrest made in Croft House murder 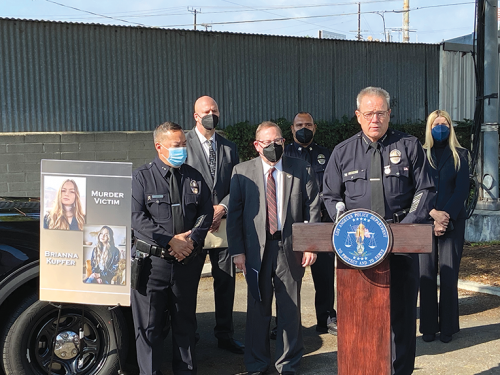 LAPD Chief Michel Moore and Councilman Paul Koretz announced a reward in the murder of Brianna Kupfer prior to the arrest. (photo by Edwin Folven)

A male suspect wanted for the Jan. 13 murder of a 24-year-old female employee in a furniture store on La Brea Avenue was arrested on Jan. 19 in the city of Pasadena.

The Los Angeles Police Department confirmed that the suspect, Shawn Laval Smith, 31, was taken into custody at approximately 11:50 a.m. near the intersection of Fair Oaks Avenue and Colorado Boulevard. A citizen who recognized the suspect from video distributed by police called 911, leading to the arrest.

Smith, who police said is homeless, had been seen in the cities of West Hollywood, Santa Monica and Pasadena. LAPD spokesman Mike Lopez said Pasadena Police Department authorities turned Smith over to detectives with the LAPD’s West Bureau Homicide Unit shortly after he was taken into custody.

The victim, Brianna Kupfer, of Pacific Palisades, was found dead on Jan. 13 inside Croft House at 326 N. La Brea Ave., police said. A customer entered the store at approximately 1:50 p.m. and called police after finding the victim unresponsive on the floor. Officers from the LAPD’s Wilshire Division responded and cordoned off the store, which is located just north of Beverly Boulevard.

Detectives believe it was a random attack and a motive has not been released. Nothing was stolen from Croft House, investigators said. Kupfer was alone inside the store.

On Jan. 18, Los Angeles Police Department Chief Michel Moore joined city officials to announce a $250,000 reward in the case. Moore said detectives from the West Bureau Homicide Unit recovered video from the store that showed the suspect exited through a rear door and fled northbound in an alley behind buildings on the east side of La Brea Avenue.

Detectives also recovered video in the surrounding neighborhood that shows the suspect walking in the area and entering other stores on La Brea Avenue and Beverly Boulevard around the time of the murder. Police posted video of the alleged suspect in a 7-Eleven store that can be viewed by visiting youtu.be/dUPi1wemums.

“As a father, as a police professional and just as a human being, the unimaginable pain that [the family] must be going through, losing a 24-year-old daughter who had a bright and optimistic future … to have that taken away in this brutal homicide, I can’t imagine that pain,” Moore said.

Los Angeles City Councilman Paul Koretz, 5th District, called the murder a senseless tragedy and announced the city committed $50,000 to the reward. Anonymous donations brought the reward to more than $250,000, he said. It was unknown if the reward was a factor in the arrest.

“This horrible murder was an attack on our way of life, on civil society and our neighborhood,” Koretz said.

A vigil for Kupfer is scheduled from 1:30 to 2:30 p.m. on Jan. 20 in front of Croft House. Participants are encouraged to bring signs, candles and flowers.