Working out one last time 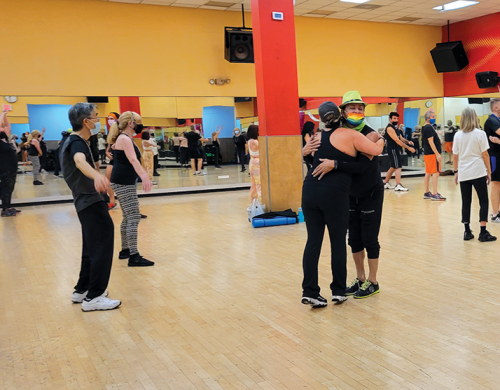 Anthony Sambrano hugs his clients in between dances during a final fitness class. (photo by Brynn Mechem)

As Donna Summer music trickled in through speakers, a room of about 40 individuals began dancing in sync, running their bodies through familiar patterns.

As the song picked up speed, dancers left the routine behind, choosing instead to ballroom dance with friends or pump their fists in the air. Slowly, the crowd began to pick up the tune.

The dancers were gathered on Nov. 30 at 24 Hour Fitness, located at 8612 Santa Monica Blvd. to commemorate the end of an era of inclusion and community-building within the gym.

The West Hollywood branch closed its doors  on Tuesday. In June, the fitness chain announced it would close 18 gyms in Los Angeles due to financial strain stemming from the pandemic.

West Hollywood residents who have attended the gym for decades said the city is losing more than a place to work out, it’s also losing a place for community.

“The gym, for this particular city is very important. It’s as important as going to church,” said Anthony Sambrano, who began working at the location in 1995. “The club has been here so long and we’ve had so much history here. There’s been a lot of friendships made, a lot of loves found and lot of life lived together.”

Aside from new friendships, Sambrano met his partner, Paul Contessa, at the gym on his first day as an instructor. The couple has been together for 27 years, and they were one of the first 10 people to get married in West Hollywood when same-sex marriage was legalized.

“Who goes to the gym and meets their lifetime partner? But that’s what happens here,” Sambrano said with a laugh.

Many gym members have been attending the location since it was home to West Hollywood Sports Connection, which inspired the film “Perfect,” starring Jamie Lee Curtis and John Travolta.

Suzy Salerno, who is now in her 60s, has been attending the gym since she was 16. She said that throughout the last several decades, the gym has offered a welcoming, inviting environment to many.

“These people are so heartwarming and supportive,” Salerno said. “We’ve been through happy times and we’ve been through deaths. But we’ve always shared a lot of memories, and for many, it’s like a family.”

Members from throughout the decades gathered at the gym on Tuesday for one final class and party hosted by Sambrano.

One such attendee was Kris Mowrey, who used to spend most of her morning attending classes and swimming at the gym. However, she has been unable to attend in recent months because she was diagnosed with cancer.

At the party, clients questioned where they will each relocate. In a Facebook post, the West Hollywood branch said memberships will be transferred to the Santa Monica location 8 miles away, but many gym members said that was too far to travel.

A new gym affiliated with John Reed Fitness is planned for the location. However, many 24 Hour Fitness clients fear the price and the modern workout environment will not suit them. A monthly membership to 24 Hour Fitness starts at $30, while a John Reed membership costs $130.

“I look at 24 Hour Fitness as the Walmart of gyms,” Sambrano, who will now instruct classes at a different branch, said. “Some clients have a $99 a year contract and it would be too hard for them to move to this new gym.”

Spokespeople for John Reed Fitness said it was too soon to divulge what type of programs residents can expect. The fitness brand is known for its modern workout environment, incorporating design elements and music programming with live DJs, which offers a nightclub environment.

Construction on the new gym is expected to begin in early 2022.

Judge role is icing on the cake