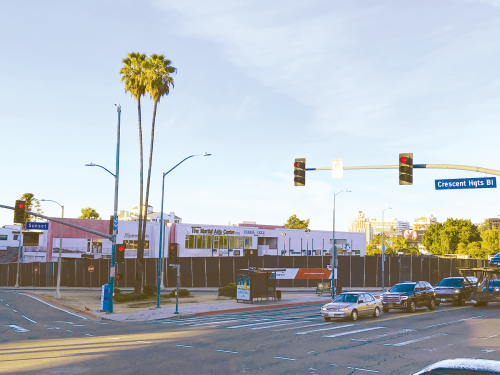 A construction fence and sound wall have been installed around the 8150 Sunset project before work commences in the new year. (photo by Edwin Folven)

Fencing has been put up in preparation for more work at the 8150 Sunset project.

Designed by architect Frank Gehry, who is also known for his work on the Walt Disney Concert Hall, 8150 Sunset will include a pair of mid-rise buildings featuring more than 200 residential units, some of which will be allotted for workforce and affordable housing.

The housing will be built atop 57,300 square feet of retail space and parking. Work was last done on the project in May after the Lytton Savings building, which stood near the intersection of Crescent Heights and Sunset boulevards for more than 60 years, was demolished.

“As we begin preparations to demolish the remaining structures on the site, a construction fence and sound wall are being installed,” he said. “We’ll have more updates as work commences in the new year.”

Gehry’s design will be 178 feet in height. It is situated on property that used to house the Garden of Allah hotel, which was popular with celebrities before it was demolished and replaced with the Lytton Savings building in the 1950s.

First proposed in 2013, the project was originally approved by the Los Angeles City Council in 2016. Shortly after, Fix the City and the Los Angeles Conservancy filed separate lawsuits against the city of Los Angeles that alleged that the city failed to comply with the California Environmental Quality Act while considering the demolition of the Lytton Savings building, designed by architect Kurt Meyer.

The building was designated a Los Angeles Historic-Cultural Monument in 2016, but the California Supreme Court declined to hear the appeal preventing its demolition.

Gehry’s latest designs for the project consist of a largely glass exterior, made to look like blocks stacked on one another. Lewis said construction will take two years, and the project is anticipated to be complete by 2024.

This project is absolutely beautiful also it would be great if the Hollywood hills were to be higher and wider from crescent drive to Beverly hills.