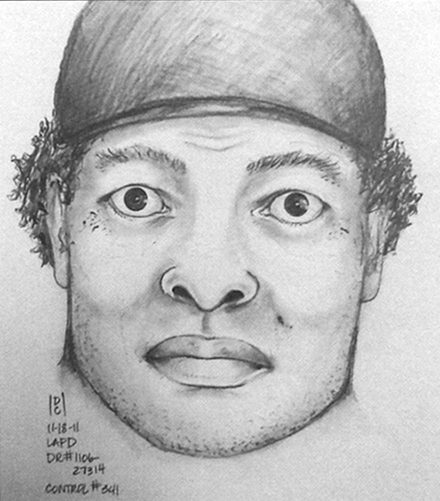 Authorities released a sketch of the Western Bandit in 2011. A suspect was linked to the crimes by DNA and arrested in 2015. (photo courtesy of the LAPD)

A man who authorities dubbed the Western Bandit due to the series of 23 violent crimes he committed along the Western Avenue corridor from South Los Angeles to Hollywood from 2011-14 was sentenced on Dec. 8 to life in prison without the possibility of parole.

Patrick Watkins, 57, was convicted on Nov. 19 of 48 counts, including murder, attempted murder, second degree robbery, assault with a firearm, shooting at an occupied vehicle and being a felon in possession of a gun. In addition to life without parole, Watkins was sentenced to 1,440 years to life in prison.

Detective Chris Marsden, a 25-year Los Angeles Police Department veteran who has been assigned to the Robbery-Homicide Division for the past nine years, called Watkins the “most dangerous person I’ve ever come across.” The detective said in most instances, suspects who commit robberies do no harm to victims if they comply with demands. Watkins shot 10 people, killing two of them, whether or not they complied during robberies, Marsden said.

“None of these made sense. It seems like he only did it to instill fear in people,” he added. “It didn’t matter whether people gave their stuff up or not, he was violent.”

According to a timeline provided when authorities announced Watkins’ arrest in November 2015, the Western Bandit’s crime spree started on Nov. 14, 2011, when he assaulted a victim at approximately 6:40 a.m. near Fourth Street and Western Avenue, and shot a victim during an attempted robbery five minutes later in the 4500 block of Fourth Street. The victim who was shot survived, police said.

Three days later, on Nov. 17, 2011, Watkins shot Cassidy Vickers, a transgender woman who was killed at approximately 9:55 p.m. near Lexington Avenue and Gower Street in Hollywood. Approximately 35 minutes later, Watkins fired shots at a transgender woman during an attempted robbery at Plummer Park in West Hollywood. The second victim ran away when the suspect demanded her purse and was not struck by gunfire.

An additional robbery in which Watkins shot a victim occurred at approximately 11 p.m. on Nov. 17, 2011, near Seventh Street and Kingsley Drive. Authorities said approximately seven months passed before the Western Bandit struck again, robbing separate victims on June 16, 2012, in the 4000 block of Ninth Avenue and the 3100 block of West Vernon Avenue. Both robberies occurred within an hour of each other and in both instances, the suspect fired shots that missed the victims, police said.

Another attempted robbery attributed to the defendant occurred on Aug. 30, 2012, in the 900 block of South Manhattan Place. The suspect also fired gunshots during that robbery, but did not hit the victim.

The most crimes in one day linked to Watkins occurred on Jan. 8, 2013, when four assaults and attempted robberies were reported. The suspect fired shots during two assaults in the early morning hours on 42nd Place and 35th Place in South Los Angeles. Around 10:20 p.m. the same day, two victims were robbed and assaulted during separate incidents near Bronson Avenue and Country Club Drive, including one who was shot.

Police received a break in the case during the June 2014 shooting near Seventh Street and Wilton Place. A shirt was located near the scene, and testing revealed DNA evidence belonging to Watkins was present on the garment. Marsden said investigators surmised Watkins wrapped a gun in the shirt or may have accidentally dropped it near the crime scene. Watkins was required to submit a DNA sample when he was previously incarcerated, and police linked it to DNA evidence on the shirt.

Watkins was arrested on Oct. 29, 2015, at his apartment in South Los Angeles near Crenshaw Boulevard and Slauson Avenue. The handgun believed to have been used in all of the crimes was found in a shoebox in Watkins’ kitchen, Marsden added.

The detective said Watkins used a bicycle for transportation and told police that he frequently rode 15-20 miles at a time. It was never determined why Watkins spent so much time along the Western Avenue corridor, but he admitted to police that he had frequented the Koreatown and East Hollywood areas since the 1980s.

Marsden said Watkins had a lengthy criminal record prior to the crime spree and called him the “poster board of a career criminal.” The defendant was arrested for robbery in the 1990s and spent an undisclosed amount of time in prison before being released in 2009, police said.

The trial took six years because of the complexity of the criminal case and time allowed for the defense to prepare, Marsden said. The COVID-19 pandemic also caused delays.

Although authorities have closed the Western Bandit case, Marsden surmised there may be other victims based on Watkins’ extensive criminal past. He also stressed the impact the crimes had on victims and their families.

“There were a lot of people whose lives were changed forever. They have to relive this every day of their lives. It’s definitely affected me, as a detective, to see what these people have gone through,” Marsden said. “I’m glad it’s over; it’s been a long 10 years. It’s nice to see it finally come to an end.”