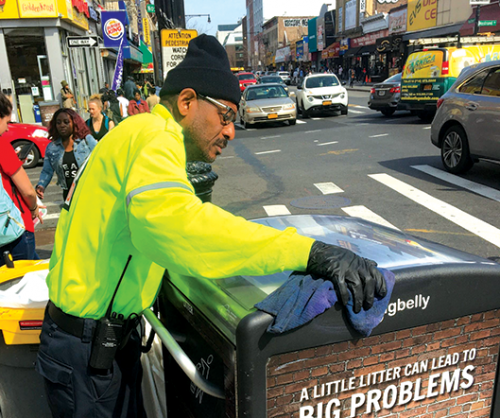 Block by Block ambassadors can serve in a variety of capacities, such as hospitality and safety services, street cleaning and homeless outreach. (photo courtesy of Block by Block)

As the number of burglaries and smash-and-grab robberies through­out Los Angeles increase, the West Hollywood City Council voted on Dec. 20 to increase safety patrols by Block by Block ambassadors throughout the holiday season.

An item considered by the coun­cil originally called for an increased amount of Block by Block ambas­sadors through Jan. 3 and for the reinstatement of two positions on the West Hollywood Sheriff’s Entertainment Policing Team.

The two positions – a sergeant and a deputy – were eliminated as part of citywide budget cuts due to the pan­demic. Reinstating the positions would cost $601,000 annually, so the city would need to allocate $300,000 from the general fund budget to cover the cost for the remainder of the fiscal year.

Councilman John Erickson said because the city doesn’t have the audit, council members do not know how money is being spent.

“We don’t know where any of those dollars are going. They won’t let us look at their books at all,” he said. “And the sheriff told us to take a long walk off a short cliff, essential­ly. So, I don’t know if giving them $600,000 is going to say, ‘You know what, now we actually could work.’”

Mayor Lauren Meister, who initi­ated the motion, said she supports the audit, but the two sheriff’s posi­tions were removed due to COVID-19, not because of an auditing issue. She said reinstating the deputies would give residents and business owners a better sense of security.

“Our captain of our West Hollywood station and our staff seem to really care about our com­munity and seem to really work with our city to do the right thing. I understand the issues with the sher­iff – the sheriff,” Meister repeated for emphasis. “I think we all have some issues with the sheriff, but I don’t think we should be taking that out on our residents, our communi­ty, our business community or our local sheriff station.”

West Hollywood Chamber of Commerce President and CEO Genevieve Morrill said the business community works collaboratively with the city’s public safety depart­ment to raise awareness, install security cameras and share video footage. However, she said those efforts are not enough.

“The increase in unhoused popu­lation, backups at the ports, limited criminal accountability because of recent legislation, as well as a high level of poverty and mental illness has caused an uptick in criminal activity,” Morrill said. “We need boots on the ground. We need to help avoid the crimes by having a police presence.”

Councilman John D’Amico said that public safety is his No. 1 prior­ity. Although he noted there has been increased crime in Beverly Hills and Los Angeles, there hasn’t been a spike in West Hollywood.

However, he said he’s spoken to several business owners who have safety concerns, and the city should work to address those fears.

“I can’t not support this because there’s so much fear in our commu­nity that we, in my mind, we need to support this in order to begin the process of causing a calming of waters in West Hollywood,” he said.

Mayor Pro Tempore Sepi Shyne that she was in favor of increasing Block by Block presence, but not reinstating the sheriff’s deputies.

“I’m committed to what works and putting our money behind what works, rather than putting it behind what isn’t working,” Shyne said. “And unfortunately, for me, our relationship with the LASD, who we contract with, is not working.”

Shyne pointed to a public safety survey conducted by the city in November that showed a majority of residents ranked their satisfaction with the sheriff’s department’s ser­vice lower than in previous years.

Further, Councilwoman Lindsey Horvath said the city asked every department to make budget cuts and adhere to them through the end of the current budget year, which ends on June 22. Horvath made a substitute motion to approve the Block by Block ambassadors but postpone a decision on reinstating the sheriff’s positions until city staff’s next security presentation in the new year.

Meister said she would support Horvath’s motion because she wanted to add the Block by Block Ambassadors, but she said she also wanted to reinstate the sheriff’s positions.

The council unanimously approved Horvath’s motion and will now spend $2,000 on an additional 50 Block by Block ambassador hours throughout the holidays. The council will consider the sheriff’s positions at its Jan. 18 meeting.