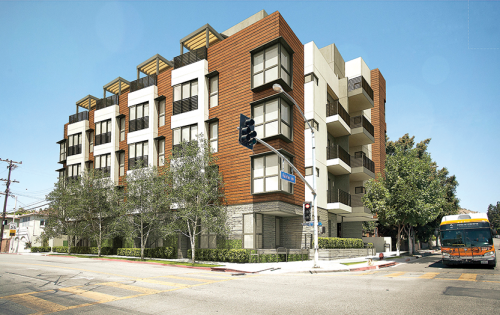 The West Hollywood City Council voted 4-1 on Dec. 6 to continue a public hearing to a future date for a controversial five-story co-living project with 18 units housing more than 73 people near the northwest corner of Fountain and Fairfax avenues. The project would have three units of affordable housing, down from the initial 14 units that were previously approved by the city’s planning commission.

Mayor Lauren Meister and Mayor Pro Tempore Sepi Shyne, as well as Councilmembers John D’Amico and John Erickson, voted to continue the appeal with some amendments. The lone no vote came from Councilwoman Lindsey Horvath. The decision will be brought back to the city council, rather than the planning commission, on the appeal.

Some of the amendments, after a subsequent motion to continue the appeal was introduced by Erickson, called for a change to the number of co-living bedrooms by “declustering” them, and not allowing visitor parking passes for the property.

On Sept. 2, the planning commission approved the 18-unit project with 73 co-living bedrooms and 32 parking spaces. The apartments designated for co-living would have four or five private bedrooms and bathrooms, but residents would share kitchen, living, dining and laundry spaces, according to a staff report. The affordable housing units will each have one bedroom.

In past meetings, residents opposed the project due to high traffic volume at the intersection. In contrast, there has been some support for the project by the public.

“I must say this is a particular low point for our development, our housing policy and our development standards,” D’Amico said. “We’re basically not getting 11 bedrooms for people who need housing and you know I don’t think housing causes accidents, but I do know that the applicant came forward offering us more bedrooms … we fumbled and we chose the least possible in the worst possible way. I’m just very disappointed with our housing department and our development standards.”

D’Amico added he couldn’t believe that developers can build co-living bedrooms for 73 people and only put 1,800 square feet of affordable housing in a building that large.

“This one was easy,” D’Amico said. “They offered to do it. It’s just mind boggling to me. It makes me want to puke. That’s my motion.”

Attorney John B. Murdock represents the property owners to the north and west of the proposed project site. In the meeting on Sept. 2, Murdock said his clients planned to appeal the planning commission’s 3-2 vote to approve the project.

“So what I’m asking you to do is to go back to your general plan and look at some of the goals that you have set, which [were] to protect the residential areas of the city from over-development,” Murdock said. “But you’re not doing that. If you approve this project, you’re just pouring traffic into the most dangerous intersection in your city.”

Murdock added that 27 emails were received from residents who opposed the project due to the dangerous nature of traffic at the intersection.

“The residents in the area know what the traffic is like. They know that there’s not enough parking. They don’t approve of this project,” he said.

Several residents expressed their concerns about the project during the public comment portion of the City Council meeting. Lesley O’Toole-Roque, a West Hollywood property owner who has lived within a few minutes walk of Fairfax and Fountain avenues for 29 years, opposes the project.

“John Murdock is absolutely right,” O’Toole-Roque said during the public hearing. “People will not rent here if they cannot park because our public transport is not suitable for any professional person with a job. It’s also apparently unsuitable for any adult who might have a future interest in being in a relationship.”

Per the proposal, the project will allow only one person per bedroom in the units designated for co-living.

O’Toole-Roque also stressed concern about traffic near the intersection, claiming there is a collision in the area at least once a month. She provided photo evidence of three collisions at a nearby intersection – Orange Grove and Fountain avenues – on Oct. 5, Oct. 12 and Nov. 13.

“It is likely I know this intersection better than any of you, as do the thousands of us who live here and will be adversely affected for the rest of our lives by this enormous threat to our health and safety,” O’Toole-Roque said in a public comment email to the council. “Please listen to those of us who live here and care for every member of our beautifully diverse community.”

Edward Levin, principal of Levin-Morris Architects, the project’s architectural firm, spoke in favor of the development. The applicant and appellant clashed on whether the units containing the 73 co-living bedrooms were single-room occupancy units known as SROs, or non-SROs. An SRO is a single bedroom unit leased to a single individual, according to the law. Levin said the units with co-living spaces cannot be single-room occupancy units. Opponents claim they are SROs and multiple bedrooms are not allowed.

“Under state law, these cannot be SROs,” Levin said. “They are dwelling units as defined by building code. Your zoning ordinance and building code tells you that bedrooms that are part of a dwelling unit can’t be sleeping units, which is what SROs are. This is not a matter for debate.”

“More certainly can be done for traffic accidents and safety, but we can’t have everything perfect all the time,” Schild said, “We need new housing and denser housing in the city … I think the city would benefit from this.”