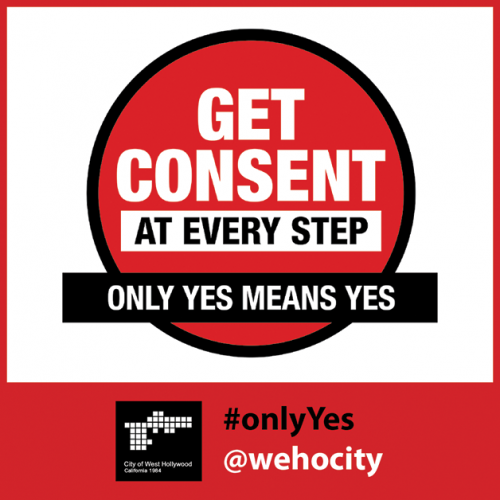 City staff is distributing four signs carrying messages about the importance of consent throughout the city. (photo courtesy of the city of West Hollywood)

The city of West Hollywood is raising awareness about sexual assault and consent with its “Only Yes Means Yes” campaign.

First launched in 2016, the #onlyYes campaign is expanding with additional focused outreach, graphics and messaging in and around nightlife establishments.

“The safety of our residents, workers and visitors is a priority for our city, which is why we have revi¬talized the #onlyYes campaign as one of our tools to ensure that peo¬ple who live, work and play in West Hollywood are safe,” Mayor Pro Tempore Sepi Shyne said. “This campaign communicates that con¬sent under the law must be affir¬mative, unambiguous and a con¬scious decision by all parties involved in sexual activity. Only yes means yes. Period.”

The campaign uses graphics inspired by roadway directional signage to deliver messages about the importance of consent. The signs carry four messages: “My caress does not mean yes,” “Just because I’m flirty doesn’t mean I’m ready,” “Get consent at every step” and “Consensual is sensual.”

The city began distribution of drink coasters at bars, restaurants and nightlife establishments on Dec. 16. The campaign also includes public service advertising on selected outdoor digital bill¬boards and on digital panels in tran¬sit shelters located at major corri¬dors and intersections.

Sidewalk decals are located in the LGBTQ Rainbow District, and a #onlyYes selfie wall is located on Robertson Boulevard, just south of Santa Monica Boulevard, where community members can take pho¬tos of themselves with #onlyYes campaign messages.

The campaign aims to foster greater awareness and to empower community members to play an active role in sexual assault preven¬tion by educating themselves and sharing the message of consent.

The city’s Code Compliance Division is developing an expanded mandatory alcohol server training program for personnel in the city’s bars, lounges and clubs that will aim to curb harm related to overuse of alcohol. To be launched in 2022, the program will also feature a related education effort to promote expand¬ed customer awareness, safety and security in bars, lounges and clubs.

The city and the West Hollywood Sheriff’s Station urge anyone who believes they are a victim of any crime to call (310)855-8850.

For information about the Only Yes Means Yes campaign, contact Larissa Fooks, community pro¬grams coordinator, at (323)848-6413 or at lfooks@weho.org.