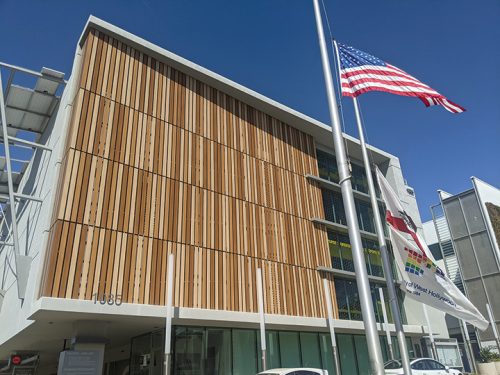 As people continue to work from home, the city of West Hollywood approved an ordinance to better address noise levels throughout the city.

The City Council on Dec. 20 unanimously approved amendments to the city’s municipal code that allows staff flexibility when addressing unreasonable noise from large parties or gatherings.

Code compliance manager Danny Rivas said the changes to the code were necessary as the number of complaints the city received increased throughout the pandemic.

“Since March of last year, and as a result of the pandemic and stay at home health officer orders, code compliance staff has received an increased volume of resident complaints concerning amplified noise and loud parties at gatherings occurring at residential properties,” he said.

The city’s noise ordinance was first adopted in 1985, with several amendments made throughout the decades, according to a staff report. Since 2007, staff members have issued misdemeanor criminal citations to individuals who violate the noise ordinance.

The new ordinance reinstates the city’s ability to issue administrative citations, which give violators financial incentive to prevent repeat violations, according to a staff report.

A criminal citation necessitates having a person appear in court before a judge, which Rivas said caused an elevated amount of city expenses because they require the city prosecutor to appear in court on behalf of the city.

Additionally, he said the issuance of a criminal citation requires a law enforcement officer to be present when the violation is occurring.

“This is problematic as there are many instances when enforcement officers cannot respond to resident calls while the violation is occurring,” he said. “There may be a delay where that enforcement officer is responding to another call and then when they arrive, of course, the noise is either not occurring or maybe the party has dispersed.”

Under the current ordinance, the violator could also be subject to a fine of up to $1,000, which would be paid to the courts and not the city, and up to six months in county jail, according to the staff report. Rivas said the old ordinance is contrary to the city’s philosophy of encouraging voluntary compliance with the law.

The administrative citation fee schedule for municipal code violations can range from $100 to $1,000 for the first offense and $1,000 to $5,000 for the third offense, depending on the type of violation.

“We always do our best to try to gain voluntary compliance,” Rivas said. “Not having the ability to issue an administrative citation for repeat offense, again, just really is opposite of what we’ve been trying to accomplish over the course of many years when responding to these types of issues.”

In a letter to the city, West Hollywood West Residents Association President Leslie Karliss said the organization supports the ordinance.

“Loud parties and gatherings, especially from short term rentals, have been the source of many complaints in West Hollywood West,” she said. “This effort to enforce and abate violations of the noise ordinance is welcome and appreciated. We encourage the council to support this amendment.”

City Council members were unanimously supportive of the change, and Mayor Lauren Meister questioned whether the ordinance could be enforced at all hours of the day, as she said more resident complaints have recently come in regarding noise during daytime hours.

“Especially since more people are telecommuting, I think they’re much more conscious of what goes on now during the day when they’re at home working,” Meister said.

Rivas said the new ordinance gives the city the flexibility necessary to address noise issues related to loud parties or gatherings at any time during the day.