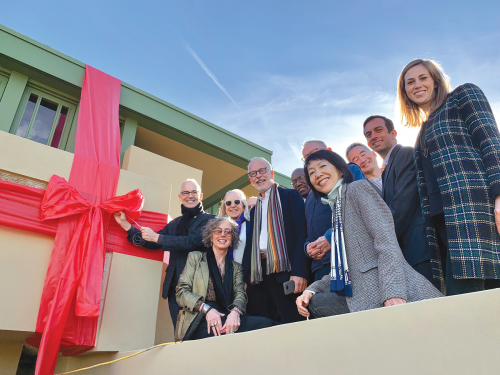 After architect Frank Lloyd Wright’s landmark Hollyhock House in Barnsdall Art Park was painstakingly restored in 2015, Los Angeles city officials set their sights on restoring a nearby guest house on the hilltop property to its original grandeur.

On Dec. 15, Los Angeles City Council President Pro Tempore Mitch O’Farrell, 13th District, celebrated the completion of exterior renovations at the guest house, known as Residence A. Also designed by Wright, the building was completed in 1921 and had fallen into disrepair. It had remained closed for more than a decade prior to the repairs commencing in 2017.

“Hollyhock House and Residence A are world-class resources right in our own backyard, which is why the careful restoration of these treasures has been so important,” O’Farrell said. “It has been amazing to watch Residence A literally come back to life and shine atop Barnsdall Art Park, one of the jewels of the city’s parks system. With phase one completed, it’s onward to phase two so we can not only celebrate the beauty and grandeur of this building, but enable all Angelenos to fully access, enjoy and learn from this priceless piece of history.”

Residence A, which is perched on a slope overlooking the 4800 block of Hollywood Boulevard, is the first building people pass after entering Barnsdall Art Park and driving to the top of the hill where Hollyhock House is located. The renovations were done by Project Restore, which also completed the restoration of Hollyhock House. The work included seismic retrofitting and improvements to Residence A’s internal systems. The exterior paint and finishes were also meticulously restored.

Phase two of the restoration project involves upgrades to Residence A’s interior, including walls, fixtures, furnishings and infrastructure. Upgrades to the exterior landscaping and repairs to make the building accessible to disabled individuals are also included in phase two of the work. Plans call for the entire project to be completed by 2024, when officials hope to reopen Residence A to the public.

Hollyhock House was designed and constructed between 1919-21 for Pennsylvania oil heiress Aline Barnsdall, who was an ardent supporter of the arts. Barnsdall donated Hollyhock House and the surrounding hilltop property to the city in 1927. Located just southwest of Hollywood Boulevard and Vermont Avenue, Barnsdall Art Park is managed by the Los Angeles Department of Cultural Affairs and includes galleries and a theater, as well as Hollyhock House. Although currently closed due to the pandemic, plans call for Hollyhock House to reopen soon for public tours. Other facilities at the 36-acre hilltop park are open, including park spaces offering views of the city and the Hollywood Hills.

In 2020, Hollyhock House was included on the UNESCO World Heritage List in a designation of multiple sites throughout the United States illustrating the importance of Wright’s architecture. Hollyhock House is the first and only property in Los Angeles on UNESCO’s World Heritage Sites list, and the only site in California.

“At 100, this National Historic Landmark is being brought back to its original 1921 design for all to enjoy,” said Abbey Chamberlain Brach, curator of Hollyhock House for the Department of Cultural Affairs. “With its exterior lovingly restored, Residence A now showcases new facets of Frank Lloyd Wright’s work on Olive Hill, as well as the vision Aline Barnsdall and her architect shared for an arts community at Barnsdall Park.”

The restoration project cost more than $5 million that came from multiple sources, including the former Los Angeles community redevelopment agency, the Municipal Improvement Corporation of Los Angeles and the National Park Service.

“As an organization committed to preserving the city’s historical landmarks, we’re excited to oversee full restoration of Residence A, a beautiful civic treasure,” said Ed Avila, president of Project Restore. “We’re appreciative of funders like Los Angeles City Councilmember Mitch O’Farrell, the U.S. Department of Interior National Parks Service and other municipal partners who make this collaboration possible and understand the importance of this work for future generations of Angelenos.”