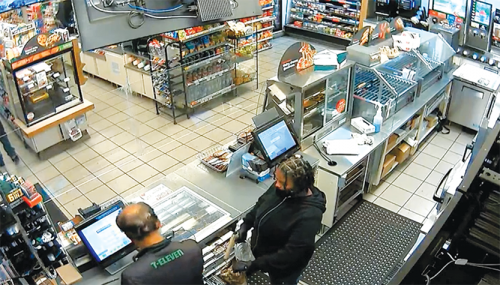 Security camera video shows the male suspect during a robbery at a 7-Eleven. (photo courtesy of the LAPD)

Detectives with the Los Angeles Police Department’s Robbery-Homicide Division are asking for help in identifying three suspects who robbed five 7-Eleven stores throughout the city from Nov. 27-29.

The suspects – one man and two women – robbed stores in the LAPD’s Northeast, Southwest, Foothill and Wilshire divisions. The robbery in the Wilshire Division occurred on Nov. 28 at a 7-Eleven store at 5000 Wilshire Blvd., said Det. D. Jaramillo, of the Robbery-Homicide Division.

During the robberies, the male suspect and one of the women entered the stores while the other woman stood outside as a lookout, police said. The male suspect pulled out a handgun, walked behind the counter and demanded money from the clerks. The suspects also stole cigars, police said.

All three of the suspects are in their 20s. The male suspect and one of the women were described as Black, while the other woman was Latina.

Jaramillo said investigators examined other robberies and determined the trio has not struck again since late November. He added that video footage of one of the robberies can be viewed by visiting lapdonline.org.

“We have the video and felt it was detailed enough that someone may recognize the suspects,” Jaramillo added.