Tips sought in robbery at home in Hancock Park 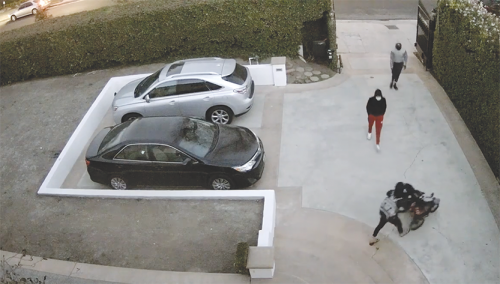 Security camera footage was released of two male suspects who confronted and robbed a female victim as she arrived home in Hancock Park. (photo courtesy of the LAPD)

Detectives from the Los Angeles Police Department’s Wilshire Division are searching for two male suspects who robbed a female victim as she arrived home with her child in a stroller at approximately 5:10 p.m. on Nov. 28 in a residential neighborhood in Hancock Park.

Police are hoping witnesses or members of the public will provide information that will lead to the suspects. Police did not disclose the address or street name where the robbery took place. Security camera footage of the crime can be viewed by visiting lapdonline.org.

Officers responded to a call about a robbery and found the female victim and her infant child at the residence. As the victims returned from a walk and approached the steps to their front door, the suspects entered through an open gate and demanded the victim’s property.

Detectives said the victim feared for her safety and complied with the suspects’ demands. The men stole a diaper bag and a bottle cooler and ran to a silver sedan with tinted windows that was parked across the street.