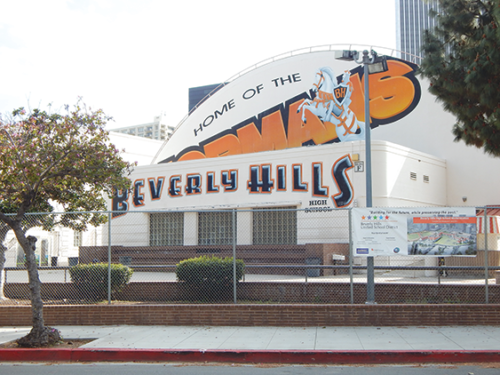 A  misunderstanding led to a police response at Beverly Hills High School.(photo by Edwin Folven)

Comments overheard and taken out of context during a conversation among students at Beverly Hills High School on Dec. 17 prompted a response from the Beverly Hills Police Department, which determined the threat was unfounded.

Beverly Hills Unified School District Superintendent of Schools Michael Bregy wrote a letter addressed to parents and staff that referenced a TikTok challenge, which reportedly began with a post on gun violence being circulated.

“In light of the TikTok challenge we informed you about last night, today a BHHS student had the courage to bring to our attention a concerning conversation they overheard about guns and safety at BHHS,” Bregy wrote. “The situation has been thoroughly investigated, searches administered, witnesses interviewed and threat assessments completed by both our BHHS administration and the Beverly Hills Police Department. It is now clear that the threat is not credible, and the conversation that took place was overheard but lacking specific context.”

During the city’s Health and Safety Commission meeting on Dec. 20, BHPD Lt. Giovanni Trejo said the incident led to a significant response from the police department.

“I can assure you that we had a small army of officers around the schools,” he said, adding that private security officers were also deployed. “Some you might have seen; others you didn’t necessarily see that they were there, but they were.”

Although the threat was eventually deemed non-credible, both the district and department treated the incident as if it was credible. Bregy said they take every potential threat seriously.

“We encourage all students, staff and the community to act swiftly in these situations, just as this student did today,” he said. “Please alert BHHS administration or a trusted adult immediately if they are concerned in any way about safety on campus.”

Trejo told the commission that, in addition to the increased security the police department is providing to schools, it has bolstered its resources in residential and commercial areas as well. The department has begun using unmanned aircraft, or drones, which he called the “latest and greatest” innovation in policing.

He said drones improve officer safety and referenced an incident in which a drone was used to look into a suspect’s vehicle and determine if the car was “safe or clear.”

Trejo echoed many of the statements Mark Stainbrook, Beverly Hills’ new police chief, has made about the department’s response to a recent increase in violent crime. Trejo stressed that the department is hiring officers as quickly as possible.

“It has been a very busy month for your Beverly Hills Police Department with a variety of issues that we’ve had to deal with. Chief Stainbrook was celebrated one day, and the very following day, he hit the ground running,” he added. “But, I have to assure you that behind the chief there is a team of professionals and a team of experts that are providing the chief with the options that he has available to combat some of the problems that we’ve seen.”