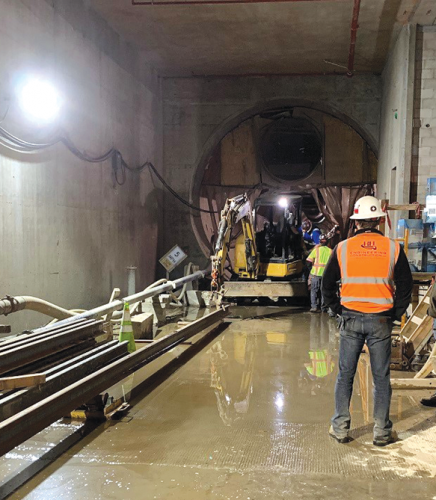 Crews are preparing to start laying rails in the subway tunnels near Wilshire/La Brea. (photo courtesy of Metro)

Work is ongoing at many locations including Wilshire/La Brea, where crews are preparing to lay permanent rails in the subway tunnels during the new year.  Work around the Wilshire/La Brea station also includes underground pipe relocation and the construction of rooms and passageways adjacent to the main subway station. Wilshire Boulevard will be reduced to two lanes in each direction between Orange Drive and Detroit Street through the first quarter of next year to accommodate work.

Farther west, work continues at the Wilshire/Fairfax subway station. A K-rail work zone is in place at the southwest corner of Wilshire Boulevard and Fairfax Avenue to support underground construction. Orange Grove Avenue remains closed south of Wilshire Boulevard, and Ogden Drive will be closed intermittently.

In Beverly Hills, work is ongoing at the Wilshire/La Cienega subway station, which is part of the first segment of the Purple line Extension scheduled to open in late 2024.  Work is occurring underground and in staging yards near the station sites. K-Rail work zones will remain in place along the north side of Wilshire Boulevard between Gale Drive and San Vicente Boulevard. In January, Gale Drive will be closed north of Wilshire Boulevard for four months.

Work is also ongoing at the future Wilshire/Rodeo station. Lane closures may be in place on Wilshire Boulevard between El Camino and Crescent drives. Construction will also occur at staging yards near Wilshire/Reeves.

Additionally, Crews will conduct subsurface investigation work underneath Wilshire Boulevard between Stanley Drive and Le Doux Road in Beverly Hills. The work is anticipated to last through mid-January. Crews will determine whether additional measures will be needed to stabilize the subway tunnels.

Along the third segment of the subway line ending at the Westwood/VA Hospital station, crews are beginning preparation work through Jan. 7 for a catch basin and storm drain. The work will occur at the southwest corner of Wilshire Boulevard and Gayley/Midvale avenues. Activities will include demolition, excavation, trenching, concrete work and restoration. Driveway and parking access, as well as traffic signals and streetlights, will be maintained in the area.