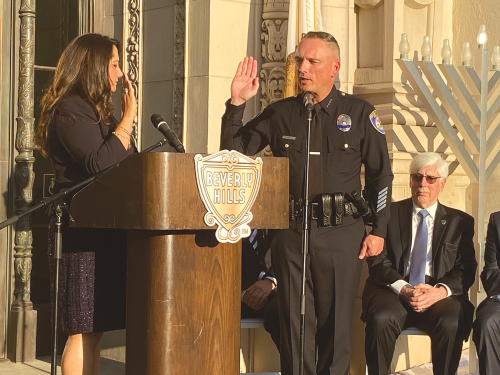 The city of Beverly Hills welcomed its new top law enforcement official on Nov. 30 when Chief Mark Stainbrook was sworn-in on the steps of City Hall.

Dozens of law enforcement officials from throughout the county assembled with city officials and community members on the plaza along Crescent Drive to witness Stainbrook take the oath of office, which was administered by Beverly Hills City Clerk Huma Ahmed. Stainbrook assumed command of the department from Chief Dominick Rivetti, who served as interim chief since May 2020.

“I would like to extend my deepest appreciation to the Beverly Hills City Council for the opportunity to serve this community. I am humbled and excited to be part of this wonderful city,” Stainbrook said. “To the men and women of the Beverly Hills Police Department who continue to demonstrate a tireless commitment to the city, thank you for your pledge to protect life and property while treating everyone with dignity and respect. Today, we begin a new journey together as we serve the greatest city in the world. I appreciate your welcome and look forward to working for you and with you.”

Stainbrook comes to Beverly Hills from the Port of San Diego Harbor Police Department, where he served as chief of police and vice president of public safety since 2018. He oversaw law enforcement on the San Diego Bay and at the San Diego International Airport, heading a department with 146 sworn officers and 32 non-sworn staff members.

Stainbrook has extensive law enforcement experience. He began as an officer with the Los Angeles Police Department in 1995 and rose to the rank of lieutenant before becoming an assistant police chief with the Port of San Diego in 2011.

He also has 32 years of military service with the U.S. Marine Corps Reserve in assignments including military police, civil affairs and information operations. While serving in Iraq in 2003, Stainbrook helped form Iraqi police units in Baghdad. He received the Navy-Marine Corps Medal for heroism, the Army Commendation Medal and the Navy Achievement Medal. Stainbrook retired from military service with the rank of lieutenant colonel.

The new police chief said he is eager to get started, and maintaining public safety will be his top priority. He urged community members to stay involved in keeping Beverly Hills safe and extended an invitation for them to partner with the police department.

“I learned very quickly that this is a highly-engaged and super-supportive community and I am very excited about that,” Stainbrook said. “Certainly, these have been challenging times, but there’s things that remain constant. We want safe neighborhoods, we want our world-renowned business district to be safe and thriving, and we believe in great community and police partnerships and relationships. This mission can never be successful without members of the community. We are going to spend the time to invest in each other, in this department, in this city and the community that we serve. Together, we will maintain the high standards of safety and security expected by the city.”

Will Pride be on parade in WeHo?