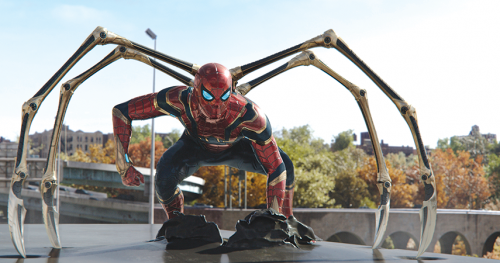 Spider-Man (Tom Holland) is ready for a fight in the latest story in the superhero’s saga. (photo courtesy of Marvel Studio)

The Marvel Cinematic Universe requires more than most major franchises from its audience, and “Spider-Man: No Way Home” continues that tradition. To truly enjoy this one, yes, you should check out the first “Spider-Man” trilogy, the next two Spidey flicks and the latest trilogy.

Perhaps that sounds exhausting, but only two of those films are mediocre, while the rest work incredibly well. So perhaps this is the kinda homework work undertaking.

Even without this level of commitment, here’s what you need to know. Following the events of “Far From Home,” the world now knows Peter Parker’s (Tom Holland) superheroic identity, and plenty of folks believe he also killed Mysterio, a villain posing as a hero.

Peter just wants to go back to the way things were, enjoying his remaining time in high school, planning college together with his best friend Ned (Jacob Batalon) and girlfriend MJ (Zendaya). But a normal life is slipping farther away, so Peter visits his old Avengers comrade, Doctor Strange (Benedict Cumberbatch), inquiring about a possible spell that can make everyone forget his identity.

Alas, that doesn’t pan out and variants from other universes arrive to complicate matters further. Doc Ock (Alfred Molina), Green Goblin (Willem Dafoe) and Sandman (Thomas Haden Church), all from the Tobey Maguire-led “Spider-Man” trilogy, along with Lizard (Rhys Ifans) and Electro (Jamie Foxx) from the Andrew Garfield films, converge on a Spider-Man who looks quite different than the one they’re used to.

Peter and Strange need to put all those villains back in their timeline, and to do it, MJ and Ned help out with some sage advice from Aunt May (Marisa Tomei) and Happy Hogan (Jon Favreau), Tony Stark’s old right-hand man. But some unexpected help also arrives from various corners of the Marvel canon.

For those diligently keeping up on the Marvel flicks, you already know what is happening next across the MCU: worlds converge, timelines mangle. “WandaVision” hinted at more trouble to come, “Loki” expanded on the battle over a “sacred timeline” and Disney+ animated series “What If” presented stories from across alternative realities.

It all might sound confusing, but it really isn’t. “No Way Home” works with or without excessive knowledge of previous films. Solo, it’s a big action story with sentimental moments. It just works that much better with the added history. 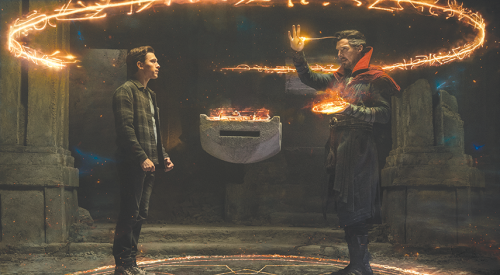 But don’t give this one credit for doing something completely unique. This marks the second interdimensional story in live action. Thank CW superhero series for doing it first, even bringing older properties like “Smallville,” “Birds of Prey” and the early ‘90s “Flash” series into the “Arrowverse.” DC films are set to do it again in the big-screen “Flash” flick, Michael Keaton reprising his Batman role.

Plenty of critics roll their eyes at all this. The only reason it can happen here is with the approval of Sony, which still owns film rights to the Spider-Man character library despite Disney’s purchase of Marvel over 10 years ago. So part of this film’s success belongs to a complicated web of industry politics, which places it somewhere between allegedly authentic art and film economics.

Regardless of how “No Way Home” could happen, the outcome is both exciting and successful, even if the whole backstory also turns this film into an ad for two other Spidey film series and even those “Venom” ones as well.

Yet, this film deserves all the praise. The acting, the throwbacks, the special effects, the emotional heft, the implications – “No Way Home” is more than anecdotal evidence that this web slinger can still lead the show across not only a trilogy, but many more films and televisual experiences to come.

Sure, other stories should be told, and Spider-Man has already graced 12 films in 19 years. It could end here on a massive high note. Hopefully not. Sony and Marvel already confirmed more to come, and “No Way Home” ends with clear eyes for the future. Bring it on.