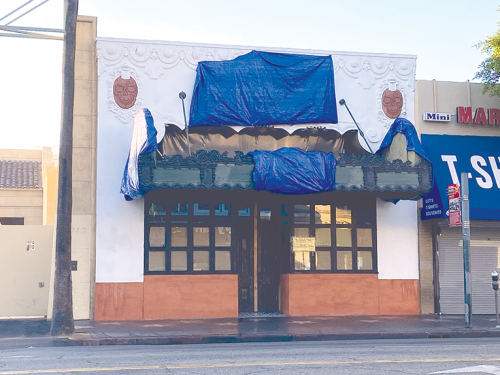 Permits were required for some of the exterior work done at the former Pig ‘N Whistle location in Hollywood. (photo by Edwin Folven)

Following unpermitted work that led to the removal of the façade at the former Pig ‘N Whistle location in Hollywood at the end of October, city officials are still waiting for the property owner, Fulcor Investment II LLC, to apply for permits.

According to Los Angeles City Planning, historic preservation architect Lambert Giessinger has received a preliminary written summary from the property owner to document construction that has occurred on the site since 1999.

Some of the interior work, such as painting and decorative finishes, do not require permits, but permits are necessary for the exterior alterations done to the signage and marquee, according to city planning. However, whether the façade will ever look the same is unclear.

“It’s a good question, and I don’t have an answer for it,” said Adrian Scott Fine, the senior director of advocacy for the Los Angeles Conservancy. “There is design review that the city has over the exterior of the building because of the register districts, so the city should have the ability to dial back some of those changes that were made to the exterior, at least that’s what we would hope would occur in this particular case.”

The Los Angeles Department of Building and Safety on Oct. 25 issued a stop-work order for all unpermitted work at the former Pig ‘N Whistle location after receiving a referral from the office of Los Angeles City Councilman Mitch O’Farrell, 13th District.

Contractors were repurposing the site for a Mr. Tempo Cantina, and work had commenced on the building’s interior and exterior. The Pig ‘N Whistle sign, a replica, was removed, and the marquee was altered.

The site is part of the Hollywood Boulevard Commercial and Entertainment District, which is recognized by the National Register of Historic Places.

Fine said the conservancy hopes the city requires Fulcor Investment to undo the unpermitted construction or find a “sensitive approach” to accommodate the new business while retaining the character-defining features of the exterior.

“It’s a really special place, and it’s unfortunate that this occurred,” he said. “It’s not, unfortunately, uncommon in Los Angeles for people do things without permits or approval, and that sometimes can have a devastating impact on an historic place like this.”

According to city planning, the site, located in the 6700 block of Hollywood Boulevard, is not listed individually as a city historic-cultural monument, so many interior alterations do not require a permit or city review.

“Nevertheless, some of the exterior alterations, such as changes to exterior signage and the marquee, do require the issuance of a permit for review by the office of historic resources and the Hollywood Sign District requirements,” a representative said.

If Fulcor Investment II LLC applies for the necessary permits, they would be reviewed under the city’s Cultural Heritage Ordinance, which must comply with the U.S. Secretary of the Interior’s standards for rehabilitation.

“These standards require that the most significant features that define the significance of a historic building be preserved wherever feasible, or replaced with similar materials when retention of historic features is not feasible,” the representative said. “If such permits were initially denied, our department would work with the applicant to develop alternative designs that would bring the project into conformance with the standards.”

In May 2019, O’Farrell introduced a motion that instructed the city’s Department of Building and Safety to work with the city attorney and chief administrative officer to prepare a report that analyzes current and possible deterrents the city could implement to prevent unpermitted remodels, additions and demolitions.

According to O’Farrell’s office, the council is awaiting a report back from the departments. When completed, the report will be considered by the council’s Planning and Land Use Management Committee.

Doesn’t matter what they do, the preservationists will never be happy because so many of them don’t know or refuse to acknowledge the difference between history and nostalgia. Another business will exist there, get over it.

Pig N Whistle was history (cafeteria for Judy Garland, Cary Grant, other MGM stars)….. and it got destroyed.