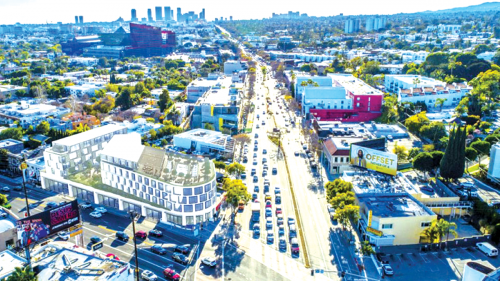 A proposed six-story structure would create 30 condominium units, five of which would be designated affordable housing. (photo courtesy of Tighe Architecture)

A new six-story, mixed-use development could soon be added at the intersection of Santa Monica and La Cienega boulevards.

On Dec. 14, West Hollywood staff held a virtual neighborhood meeting for the property, located at 8500 Santa Monica Blvd., where residents were able to get a first look at the design.

The proposed project, designed by Tighe Architecture, would include a six-story, 33,400-square foot building. About 3,790 square feet would be set aside for ground floor commercial use, leaving 28,500 for residential use.

“The commercial area at Santa Monica and La Cienega is of great importance, and this space will have a great presence,” Tighe Architecture principal Patrick Tighe said.

“Those kids get an opportunity to be supervised by the LGBT Center, and they are housed in affordable housing so that they have a chance to finish their education, go to college [and] become successful members of society, as opposed to not having those same opportunities and equality that other people do,” he said.

Bikes and Hikes LA, which is currently located on the property, would be demolished to make way for the new structure.

Residents at the meeting expressed concern with the number of parking spaces allotted for the project. The current plan would include two levels of subterranean parking, allowing 31 parking spaces, 20 for residents and 11 for commercial use.

“Given this location, where there’ll be no street parking, really, for any of the residents, do you think 20 spaces is going to make this an attractive project for people who are going to live there?” resident Mark Lehman questioned.

Elliott said that the project aims to create an environment in which residents will be within walking distance of most essential businesses and therefore would not be as reliant on cars.

“People want to be able to, within a five-minute walk, do some very essential things – drop off their clothes to a dry cleaner, do their grocery shopping and also be able to go to some restaurants,” he said. “I think that in an ideal way, this particular location offers people the ability to do those things and not have to drive places.”

Tighe said the building was also designed with sustainability in mind, using environmentally-friendly materials to create a structure with plenty of open space to allow for natural circulation. Each unit has a private balcony, and a rooftop deck will provide open space for residents.

A strip of land to the west of the project will be used for a resident-only park, which includes a dog run. The project also allows a 21-foot setback from La Cienega Boulevard to mitigate impacts from the street, and a public parklet is planned for the space.

“It was important to us that it’d be a very sustainable building,” Tighe said. “… So, the idea was to create as much open space as possible to have all the circulation be open air to get as much light and air into the building.”

Vehicular access for the site is proposed through a driveway along La Cienega Boulevard, and resident access will be off Santa Monica Boulevard.

Finally, Tighe said the project aims to use the corner of the property for an “art element” that would tie the project into the city’s arts programs. Project leaders have not yet engaged an art consultant to discuss possibilities, Elliott said.

“Given its location, we feel that there’s an opportunity to do something very iconic,” he said.

The project will have to go through the Planning Commission for approval. Tighe said demolition of the current structure isn’t likely to occur for another year.