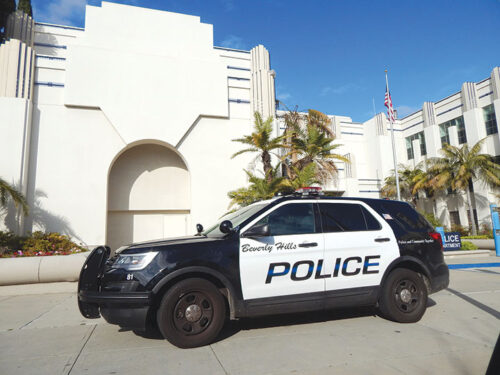 Flyers containing hate speech were again distributed on residents’ lawns in the city of Beverly Hills.

The flyers were in plastic bags and are similar to others found in the northeast area of Beverly Hills on Nov. 28, the first day of Hanukkah. The leaflets contained anti-Semitic messages and references to the COVID-19 pandemic, police said.

“The Beverly Hills City Council would like to remind all who commit acts of hatred toward members of our community that these cowardly acts and any divisive attempts of intimidation will be rejected outright,” read a statement from the Beverly Hills City Council. “As a city that is made up of a diverse population and being one of the only Jewish-majority cities outside of Israel, the city condemns this unwarranted hate speech that has been unsuccessfully used to disparage a community that has, and always will, stand strong together and fight hatred of any kind. Senseless acts like this have no home here and will never be accepted. Our community is home to families of survivors of the Holocaust who have seen evil and will never give in to such attacks.”

Beverly Hills Vice Mayor Lili Bosse also denounced the flyers in posts on social media. “Once again, these disgusting words of Jew hatred blaming Jews for involvement with COVID were dropped on the sidewalks of our city. As we have fought for ‘never again,’ I am sickened to see once again, this despicable act occur in front of our homes,” Bosse posted. “The police are investigating this horrific incident. As a daughter of Holocaust survivors, this cuts to the core of my soul. I know it cuts all of our hearts to see hatred in humanity still exists. My heart breaks to see this mortifying anti-Semitism.”

She said on Dec. 20 that someone sent her an anti-Semitic message in response to her condemnation of the leaflets.

“I received [hate mail] today because I shared my heartbreak and disgust by the Jew hatred flyers dropped off on the sidewalks of our city,” Bosse posted on Instagram. “I’m sickened to see this despicable act of anti-Semitism. My mother survived Auschwitz. I will always stand up to anti-Semitism and hated of any kind.”

The BHPD is providing additional patrols and private security guards throughout the city to ensure a safe holiday season. Trejo said investigators are reviewing security cameras to determine who left the flyers and are looking into who sent Bosse the anti-Semitic message.

Trejo added that it appears the bags with flyers were thrown from a passing vehicle or bicycle. Similar flyers were found in the city of Pasadena on Dec. 18, as well as cities in Texas.

“It could be a main group with sympathizers and based on the geographic locations, it’s definitely not one person,” Trejo said. “We have not confirmed the identity of anyone or any group that is doing it. We are working with everyone at the local, state and federal levels [to solve the crimes].”