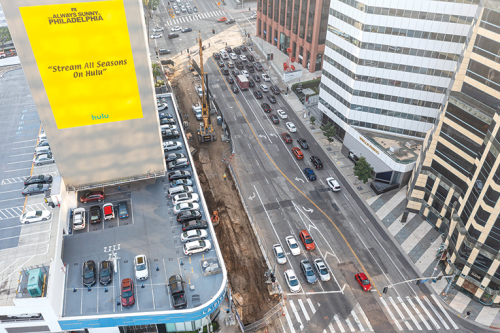 Work on the Purple Line Extension subway project will be ongoing in December at many locations along Wilshire Boulevard between the Westwood/VA Hospital station and the Wilshire/Western station.

At the western end, crews are currently working on piling for the future Westwood/UCLA subway station. The work is occurring along Wilshire Boulevard between Westwood Boulevard and Gayley Avenue. Steel piles are being driven into the ground to create the border around the future subway station prior to excavation of the station box. Crews are also relocating traffic signal conduits, pipes and other infrastructure in the Westwood area.

Farther east, crews are continuing excavation at the site of the future Century City/Constellation subway station. Support is also ongoing in Century City for twin tunneling machines that are currently excavating the subway tunnels under Beverly Hills.

At Wilshire/Rodeo, crews are working underground on the future subway station, and at staging yards near Wilshire Boulevard and Reeves Drive. The work may require lane closures on Wilshire Boulevard between El Camino and Crescent drives.

Similar underground construction is ongoing at the site of another future subway station near Wilshire/La Cienega, where concrete and material deliveries are expected to become more frequent in December.