Man arrested after firing shots from balcony in Hollywood 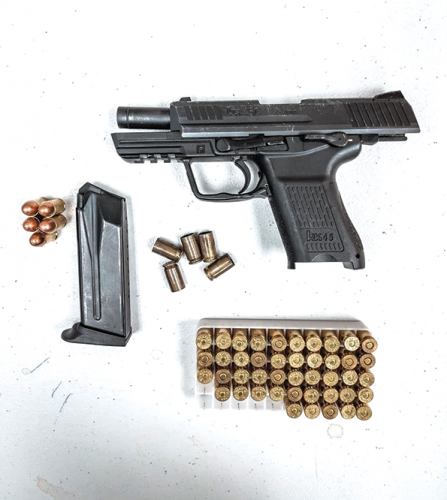 Authorities released a photograph of the gun recovered from the suspect’s apartment. (photo courtesy of the LAPD)

A 35-year-old man was arrested on Dec. 12 after firing at least three shots from the balcony of an apartment building in the 6200 block of Hollywood Boulevard as a large crowd gathered nearby. Fans of the late Mexican singer Vincente Fernandez, who died earlier that day, congregated at his Walk of Fame star. No one was injured.

The bullets are believed to have struck another building on Hollywood Boulevard. Los Angeles Police Department spokeswoman Lizeth Lomeli said police received a call about shots fired at 7:40 p.m., and officers were directed by witnesses to an apartment building at 6201 Hollywood Blvd., located between Gower Street and Argyle Avenue.

Detective Scott Frus, with the LAPD’s Hollywood Division, said witnesses reported that the suspect fired from a balcony on either the fourth or sixth floor, but officers found him in his apartment on the second floor of the building. Frus said a handgun, ammunition and three empty shell casings were found in the apartment, as well as a substance that is believed to be cocaine or fentanyl.

The suspect was identified as Joseph Ditrich. He was arrested on suspicion of shooting into an inhabited dwelling and held on $500,000 bail.

“Without going into much detail, we believe it was a mix of mental health issues and drug use,” Frus said. “That’s based on some statements the suspect made. He believed people were targeting him, and in his words, he was defending himself.”

Frus said no connection was made between the suspect and people paying homage to Fernandez, whose star is located at 6160 Hollywood Blvd. He added that the gunfire scared people on the street and prompted a significant response from the police department.

“By the grace of God, nobody was hurt,” Frus said. “At this point, the evidence suggests that it was a mental health issue, and it appears that he didn’t shoot at anyone in particular.”

A wonderful evening of wine at Ospero