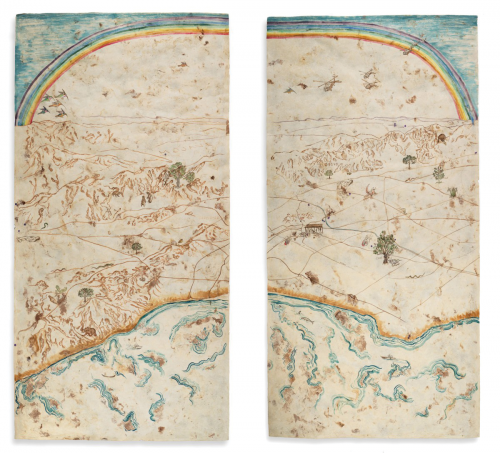 Two new exhibits focus on the endeavors of indigenous artists in Mexico and Los Angeles. (photo courtesy of LACMA)

“Mixpantli: Space, Time and the Indigenous Origins of Mexico” marks the 500th anniversary of the fall of the Aztec capital Tenochtitlan – modern-day Mexico City.

The exhibition subverts the traditional narrative of conquest by centering the creative resilience of indigenous artists, mapmakers and storytellers who forged new futures and made their world anew through artistic practice.

Nahua scribes gave the name mixpantli, or “banner of clouds,” to the first omen of the conquest, depicting the omen as both a Mexican battle standard and a Euro-Christian column enveloped in clouds. Mixpantli, then, reflects the bringing together of both Nahua and Christian worldviews and the efforts of indigenous peoples to reorient space and time in a new world and era.

The exhibition will be housed in the Resnick Pavilion through May 1, 2022.

The second exhibition, “Mixpantli: Contemporary Echoes,” showcases the lasting impact of indigenous creative resilience, connecting the vibrant artistic traditions of the past and the present from Los Angeles and Mexico.

The exhibition features the works of contemporary artists and mapmakers who draw on indigenous cartographic and artistic histories to challenge dominant narratives about place and belonging.

Artworks include Mariana Castillo Deball’s “Vista de Ojos,” a wooden pavement etched with the oldest map of Mexico City as originally illustrated by a tlacuilo; a series of maps by Sandy Rodriguez, who paints with traditional pigments on amate paper to explore the intersection of social memory and contemporary politics; and an interactive map of the indigenous communities of Los Angeles, produced by Comunidades Indígenas en Liderazgo.

The exhibit will be housed in the Broad Contemporary Art Museum through June 12, 2022.

Aside from the new exhibitions, the museum is offering several events that coincide with the national “Obama Portraits Tour.”

Today, from  7-8 p.m., join LACMA for a presentation of Poetry in Color. Poets representing each of the cities along the portraits tour will present original poems inspired by the portaits.

From 6-9 p.m. on Dec. 17, get inspired by the portraits before designing and cutting a block print in a workshop led by Eszter Delgado.

The cost is $45 for members and $50 for the general public. Art supplies are included, but participants should bring an image to make into a personal symbol.