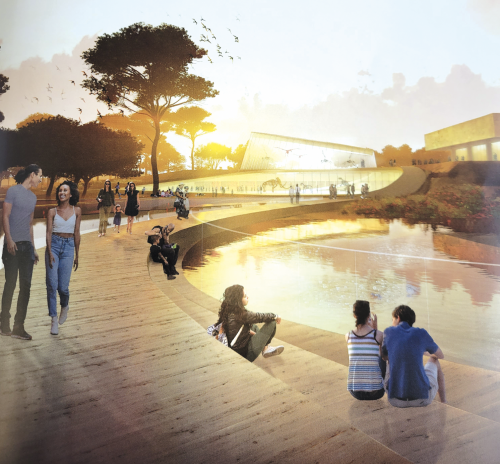 The redesign includes the addition of a walkway across the Lake Pit. (photo courtesy of the Tar Pits)

Over the last 50,000 years, the earth below the La Brea Tar Pits has been adapting to fit the environment around it, and now so too will the museum.

On Tuesday, museum officials welcomed members of the public to catch a sneak peek of a master plan for an overhaul of the museum campus.

Designed by the New York-based architecture firm Weiss/Manfredi, the renovations will include the creation of a new building and terrace walkway, nearly doubling the museum’s current size by adding 41,000 square feet of space.

The 13-acre campus will be connected by a 1-kilometer double-helix loop designed to create a dynamic visitor experience that will enhance visibility of the museum’s collections and scientific activities throughout the property.

“We want the Tar Pits to be a place of discovery and inspiration for people of all ages,” said Dr. Luis Chiappe, senior vice president of research and collections, and architecture. “… But our ambitions are limited by the physical realties of this building. There is so much potential for our collections to provide new and exciting scientific information, but we simply don’t have the space to curate fossils or properly study them in a comprehensive way.”

The revamp begins with a new entry plaza at the campus’ Wilshire Gateway that will include a shaded plaza where guests can stroll through a Pleistocene Garden that reconstructs the types of plants that were alive 30,000 years ago.

A new walking path will be constructed over the Lake Pit, giving visitors an up-close look at the museum’s iconic mammoth sculptures. The path will lead to a new entrance and a raised terrace walkway that will include a concession stand and bar, preliminarily called the Tar Bar.

A main portion of the redesign includes the addition of a new Exhibition Building, which will expand the museum’s exhibition space and serve as a setting for programs, theater performances and films. The proposed plan nearly doubles the museum’s research and collections space, Chiappe said.

Additionally, the atrium in the current museum building will be renovated to accommodate a new fossil lab for scientific research and a community science lab to allow visitors to gain hands-on experience with microfossils. Chiappe said the new space will allow approximately 350% more fossil storage than the current configuration.

The buildings will be constructed with large glass panels that allow guests to see exhibits from outside. At night, the panels will be activated with projections of animals that roamed the Earth thousands of years ago.

“This plan is not just about buildings,” Chiappe said. “It is about advancing our ability to develop the next generation of scientists and to make critical discoveries about the Tar Pits and about climate change and biodiversity moving forward.”

Additionally, a shaded outdoor classroom will be added at Pit 91, where scientists conduct new digs throughout the summer. Guests will be able to view the site from above and share in real-time scientific discoveries that are happening beneath their feet.

Though new buildings will be added, president and director of the Natural History Museums of Los Angeles County Lori Bettison-Varga said it was important to preserve the community’s public green space, because the campus is often used as a park by nearby residents.

New public amenities will include picnic areas, playgrounds, spaces for bird watching and a potential dog park. The grass slopes, which children “so often like to roll down,” will remain, Bettison-Varga said.

“Living here, we all know that open space is rare and valuable,” she said. “This is why it’s important to keep the site open and accessible to all.”

Preliminary designs for the property included an underground parking structure, though Chiappe said that idea has since been dropped due to cost. Parking will remain in its current location, and Chiappe said more people can visit the museum with public transportation after the Purple Line Extension subway project is complete.

Museum officials hope the renovations will be complete by the 2028 Summer Olympics in Los Angeles. Alongside the new Academy Museum of Motion Pictures and renovations at the Los Angeles County Museum of Art, Bettison-Varga said she’s excited to bring another revamped museum to the Miracle Mile.

“There’s no doubt that the Miracle Mile is poised to be a bucket list destination like it’s never been,” she said.

The master plan will undergo a public review process throughout 2022, which will allow ample opportunities for public engagement, Bettison-Varga said.