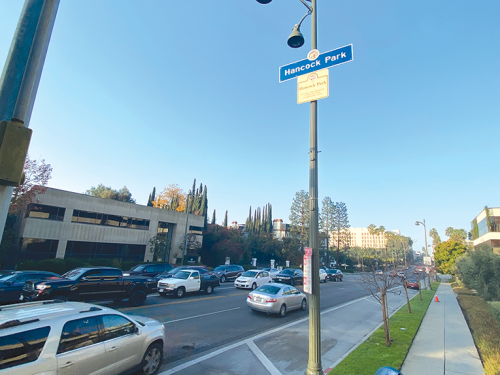 Three street robberies and an attempted car jacking are among the crimes that occurred in the Hancock Park area in November. (photo by Edwin Folven)

Hancock Park residents have witnessed upticks in crime over the years, but the current climate is new to many homeowners in the Los Angeles neighborhood.

A handful of recent, high-profile incidents prompted the Hancock Park Homeowners Association to host a security town hall on Dec. 6 to discuss how residents can prepare for – and protect themselves from – the worst.

“It’s been significant, and we have to remain vigilant and watch out for one another,” Cindy Chvatal-Keane, the association’s president, said of the crime increase. “Our neighborhood has been very good at that.”

In November, the Los Angeles Police Department’s Wilshire Division responded to three street robberies and one attempted carjacking in Hancock Park, Capt. Anthony Otero said. A street robbery on Nov. 28, when a woman pushing a stroller was followed home and robbed on Rimpau Boulevard, made national news.

Otero said the Hancock Park area has seen an “extreme” increase in robberies over the past two weeks, and that Wilshire Division is looking at different ways to prevent them. He said LAPD’s Metropolitan Division has been called in to assist, and additional bike units are being deployed.

When asked for suspect descriptions, Otero said that in five recent incidents, all of the suspects were male, between 20 and 25 years old. One suspect was Hispanic, and the other four were Black, he said.

“They’re driving vehicles around,” Otero added. “They’re pulling up in the vehicle, exiting the vehicle, so we know we have at least three people in the car – one driver and two passengers to get out and commit the robbery.”

He said residents can further protect themselves and their properties in multiple ways. Ideally, homes should have well-placed, high-quality cameras, trimmed bushes and proper lighting. Otero also discussed the security benefits of being a dog owner.

Additionally, residents should keep expensive items out of sight and always be aware.

Capt. Sonia Monico added that residents should not resist if they are robbed.

However, some of Monday’s discussion pertained to residents potentially defending themselves and their property by using deadly force.

“The law, in the past, has [allowed] people [to] defend themselves that way, but there’s that fine line if it’s just [used] to defend your property,” Otero said. “That is not acceptable under the law. It’s for defense of your life or great bodily harm.”

The captain praised security companies such as SSA Security Group, a company created by former LAPD officers that provides security in multiple neighborhoods, including Hancock Park.

Residents can also assist with investigations. Providing license plate numbers are key, and Otero advised residents to give police officers anything recovered at a crime scene, especially something that a suspect may have dropped.

Residents mulled the possibility of establishing a license plate recognition camera system, such as the one currently being implemented by Melrose Action.

Chvatal-Keane said it appears that the penalties for these types of crimes are insignificant, and that news reports have stated that suspects are often released after a short period of time.

“You’re correct in your observations on what you’re seeing,” Otero said. “All I can do is ask our officers … to do their jobs and do their investigations and do their best to keep you safe and put perpetrators in handcuffs and take them to jail.”

What is going on right now is “lawlessness,” and what people are willing to do “nowadays is simply amazing,” he said.

“Unfortunately, it’s going to take them walking into the wrong house, and someone’s going to arm themselves,” Otero said, adding that several residents have recently inquired about laws involving firearms. “Until that happens, I’m not sure people are really going to be deterred until they enter the wrong house, so to speak. That’s going to happen sooner than later.”