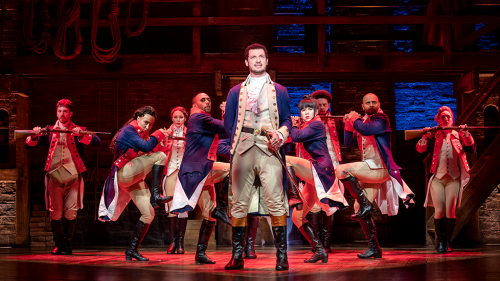 Jameal Westman appears in the national tour of “Hamilton.” (photo by Joan Marcus)

Due to COVID-19 breakthrough cases, the Los Angeles production of “Hamilton” at the Hollywood Pantages Theatre has cancelled performances through Jan. 23.

All tickets will be refunded at the point of purchase. Performances of “Hamilton” are scheduled to resume on Wednesday, Jan. 26.

“With COVID-19 cases still rising in Los Angeles each day, the Omicron variant has yet to peak, and we expect many refunds and suppressed sales for the next several weeks,” Producer Jeffrey Seller said. “In consultation with our epidemiologist, we are proactively and immediately cancelling performances thru Jan. 23. We look forward to resuming performances at the Hollywood Pantages Theatre with a complete and healthy company in 2022.”

“Hamilton” is the story of America’s founding father Alexander Hamilton, an immigrant from the West Indies who became George Washington’s right-hand man during the Revolutionary War. Hamilton served as the new nation’s first treasury secretary. Featuring a score that blends hip-hop, jazz, blues, rap, R&B, and Broadway tunes, “Hamilton” is the story of America then, as told by America now.

Tickets for upcoming performances may be purchased by visiting broadwayinhollywood.com/hamiltonla.