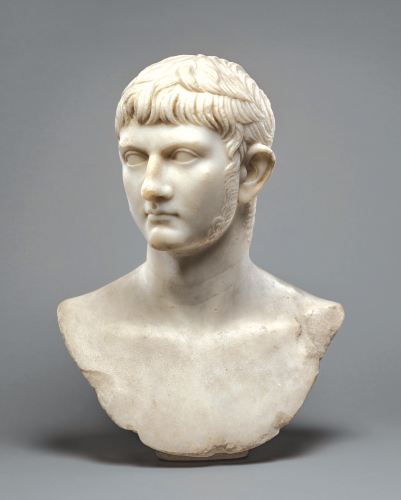 Germanicus was a Roman general who was being groomed to become emperor before his death at age 33. (photo courtesy of the Getty Museum)

The Getty Museum has acquired an early first-century marble bust of the Roman general Germanicus, adopted son of Tiberius and father of Caligula.

The bust depicts the young Germanicus before the depositio barbae, the Roman ritual of the first shaving of a man’s beard.

“This stunning portrait bust adds an extraordinary sculpture to the Villa’s collection of Roman portraits,” Timothy Potts, Maria Hummer-Tuttle and Robert Tuttle Director of the J. Paul Getty Museum, said. “It is among the finest and best-preserved portraits of the young Germanicus at the time of his adoption in AD 4 by his uncle, the soon-to-be Roman emperor Tiberius and complements nicely other Roman busts in the antiquities collection at the Villa.”

Ten copies are known today of Germanicus’ “adoption type” portrait – identified by the facial features and careful arrangement of the locks of hair over the forehead. The image was created at the time of his adoption, but the bust is a posthumous portrait of the general, who was being groomed to become emperor before he died at the age of 33, five years into Tiberus’ reign.

The circumstances of his death have been deemed suspicious and linked to his recall of Gnaeus Calpurnius Piso, the governor of Syria. Germanicus received extensive posthumous honors decreed by the senate and was venerated as Rome’s version of Alexander the Great.

In joining the Getty Villa Museum’s collection of Roman portrait sculpture, the bust complements the museum’s holdings of Julio-Claudian imperial portraits on display, including the portrait of Germanicus’ grandmother Octavia Minor, the chalcedony bust of his mother Antonia Minor, the marble portraits of his son Caligula and daughter Agrippina, and the marble heads of his adoptive father Tiberius and great uncle Augustus.

The bust was long part of the collection of the Earls of Elgin and Kincardine and may have been acquired in Rome as early as 1798 by Thomas Bruce, 7th Earl of Elgin. It stayed with Elgin’s heirs at Broomhall House in Scotland until 2012 when it was sold at auction in New York to a private collector.

The bust will be displayed in the Getty Center throughout December as part of an exhibition highlighting new acquisitions titled “Recent Acquisitions 2021: Collecting for the Museum.” After, it will go on permanent view at the Getty Villa Museum in the Early Roman Imperial Sculpture Gallery.

Enrollment open for GRoW at The Wallis programs