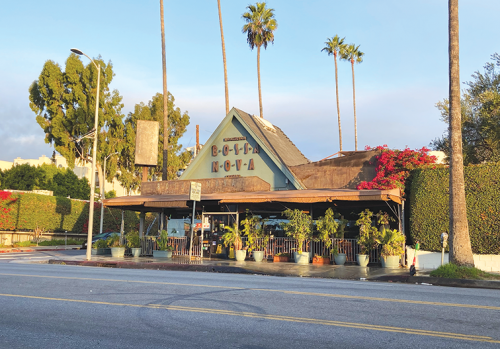 Arrests have been made in a homicide that occurred in November outside the Bossa Nova restaurant on Sunset Boulevard. (photo by Edwin Folven)

The Los Angeles Police Department announced the arrests of four men on Dec. 21 in connection with a robbery and murder on Nov. 23 in Hollywood.

The arrests were made in undisclosed locations in Los Angeles and Fontana by members of the LAPD’s Follow-Home Task Force and SWAT team. The four suspects were identified as Jayon Sanders, 21, Abraham Castillo, 20, Tyree Singleton, 20, and Joshua Saulsberry, 21. The Los Angeles County District Attorney’s Office has charged Sanders, Castillo and Singleton with murder, robbery and attempted robbery. Saulsberry was charged with one count of robbery.

The arrests and charges stem from a homicide on Nov. 23 in which a 23-year-old man was shot and killed in the 7100 block of Sunset Boulevard. The victim, Jose Ruiz Gutierrez, was sitting in a parked car with a woman outside the Bossa Nova restaurant at approximately 2 a.m. When the woman exited the vehicle, she was robbed at gunpoint by several men who approached on foot, police said. Gutierrez, who was also armed with a gun, got out and tried to intervene when he was shot and killed by one of the suspects. The female victim was not injured.

Investigators with the LAPD’s Robbery-Homicide Division, which leads the Follow-Home Task Force, declined to provide specific details about the arrests, including how the suspects were identified and where they lived. During searches of the suspects’ residences, detectives recovered a handgun, a replica handgun, more than $30,000 in cash, handbags, a Rolex watch, gang paraphernalia and two vehicles allegedly used during the robbery and murder.

Sanders, Castillo and Singleton are being held on bail in excess of $2 million, while Saulsberry is being held on $160,000 bail. All four men have been arrested numerous times, according to Los Angeles County Sheriff’s Department custody records.

Authorities have not announced whether the suspects are allegedly involved in any of the follow-home robberies, which have occurred in Hollywood and the Melrose District, as well as downtown Los Angeles and the San Fernando Valley. Detectives believe the robberies are being committed by different groups of suspects who target people leaving restaurants, nightclubs and luxury retail stores. Some of the victims who were targeted were wearing expensive jewelry and driving luxury vehicles, police said. Anyone with information is urged to call the Follow-Home Task Force at (213)486-6840.