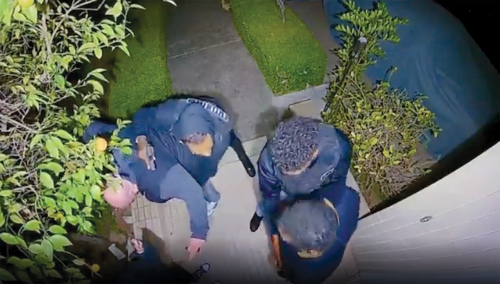 Security camera footage of the robbery on Fuller Avenue has circulated on social media. (photo courtesy of ring.com)

Detectives with the Los Angeles Police Department’s Robbery-Homicide Division are investigating a robbery on Fuller Avenue on Nov. 26 in which two male suspects wearing police-style tactical vests forced their way inside a residence as victims were returning home.

Authorities did not learn about the crime until Dec. 2, when security camera video from the crime scene began circulating on social media. Police went to the residence in the 100 block of N. Fuller Ave. and interviewed the residents, who were not identified. Capt. Anthony Otero, of the LAPD’s Wilshire Division, said the victims did not report the robbery, and it was unclear why.

Police said the two suspects approached the victims as they were walking home after dining at a restaurant in the Beverly Grove neighborhood. The suspects punched the victims and forced them inside where the robbery occurred. Three additional male suspects also entered the residence and helped gather property. A large amount of cash and jewelry was stolen, police said.

The initial two suspects were wearing black police-style vests with badges. One of the men was armed with a semi-automatic handgun and the other wielded a rubber mallet. Both suspects are Black, 20-25 years old, approximately 6 feet 1 inches tall with medium builds. Police only described the other three suspects who entered the residence as being male.

Detectives from the LAPD’s Wilshire Division initially investigated the crime before turning the case over to the Robbery-Homicide Division, which is heading a task force to combat a recent trend of follow-home robberies. No further information about the robbery was released. Anyone with information is urged to contact detectives Marsden or Hammer, with the Robbery-Homicide Division, at (213)486-6840.

Authorities in West Hollywood are also searching for two male suspects who robbed two victims at approximately 2 a.m. on Dec. 4 as they returned to an apartment building in the 800 block of Kings Road. The suspects allegedly pulled up in a black Mercedes-Benz, exited the vehicle and robbed the victims before fleeing. Anyone with information about the robbery is urged to call the West Hollywood Sheriff’s Station at (310)855-8850.

Avant family thanks community for support