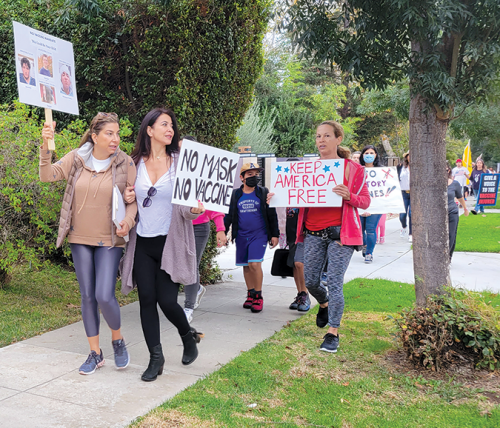 Two Beverly Hills firefighters and a Los Angeles nonprofit have filed a lawsuit against L.A. County and the city of Beverly Hills, alleging that the firefighters’ civil rights were violated by the county’s health care worker vaccine requirement, which was implemented on Oct. 1.

Attorneys Scott Street and John W. Howard on Dec. 10 filed the lawsuit on behalf of firefighters Josh Sattley and Ettore Berardinelli Jr. and the nonprofit, Protection for the Educational Rights of Kids, which is fighting the requirement at the county and state levels.

“The work of emergency first responders puts them on the front lines of patient care,” Beverly Hills city officials said in a statement. “The city remains committed to protecting the health of our residents and visitors during this ongoing pandemic.”

The lawsuit contends that the city of Beverly Hills subjected firefighters who requested a religious exemption, such as Sattley and Berardinelli, to questioning “designed to undermine their credibility and to pressure them, under the threat of prosecution, to give up their religious freedom and get the shot.”

In October, the city received 25 requests for exemptions from Beverly Hills Fire Department personnel, according to a press release issued at the time. According to the lawsuit, “interrogations” had been conducted between Sept. 28 and 30.

Eighteen firefighters were given 30-day exemptions for medical or religious reasons, one was granted a medical exemption and six were denied exemptions. Of the six firefighters who were denied, five received the vaccine, and one – Sattley – was placed on unpaid leave.

“Mr. Sattley has not worked or been paid for months,” the lawsuit reads. “That is not proper. Like all public employees, Beverly Hills firefighters have a property interest in their employment.”

The lawsuit states that the city cannot deprive firefighters of that “property interest” without due process. It contends that the city did not offer Sattley an opportunity to appeal his suspension.

“These actions are blatantly unlawful. [County health officer] Muntu Davis does not have the authority to order thousands of workers to get a medical treatment. The city does not have that power either.”

According to the complaint, Berardinelli received a temporary religious exemption but “was retaliated against” afterward. The attorneys said Berardinelli, who had contracted COVID-19 before the requirement, was reassigned to a “different job that receives far fewer calls.”

Councilman John Mirisch is also listed as a defendant in the lawsuit, which accuses him of sparking controversy with a social media post that suggested the city would impose “serious consequences” to firefighters “caught perjuring themselves in their attempt to circumvent the vaccination mandate.”

Mirisch could not be reached for comment by deadline.

According to information provided by the city, Beverly Hills has not granted any additional medical exemptions since October. Extensions have been granted to 14 firefighters who received temporary exemptions for religious reasons. The extension will remain in place until further notice.

“The unvaccinated firefighters have not shown a due process violation, they have shown that the city abused its discretion in passing the vaccine mandate and they have not shown a sufficient violation of their privacy rights,” Linfield wrote. “Further, the balance of harm weighs overwhelmingly against granting this injunction. This court does not want to minimize the harm to the individual firefighter who is placed on unpaid leave. It is certainly a severe harm. But it is dwarfed by the death of a person due to COVID. We can reimburse a person for monetary losses caused by being put on unpaid leave. We cannot resurrect the dead.”

Since Dec. 3, judges have also declined similar efforts by the Los Angeles Police Protective League and United Firefighters of Los Angeles, according to Feuer’s office.