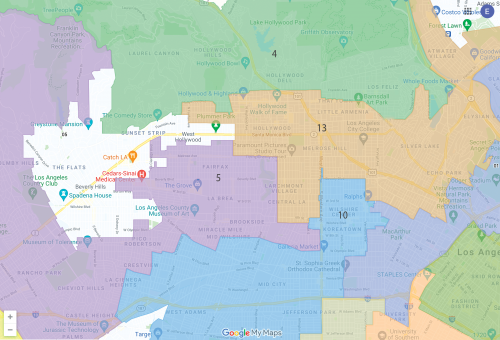 The Los Angeles City Council approved final boundaries for council districts, with changes to the 4th, 5th and 13th districts. (photo courtesy of the city of Los Angeles)

The three-month process to redraw Los Angeles City Council district boundaries concluded on Dec. 7, when the council unanimously approved a final map of the districts.

The council significantly altered Councilwoman Nithya Raman’s 4th District, which will still include Griffith Park and the Los Feliz District, and a sliver extending into Silver Lake where Raman lives. But the 4th District’s southern boundary will primarily follow Hollywood Boulevard and Franklin Avenue, and the district’s northern boundaries now extend into the San Fernando Valley to include Studio City, Sherman Oaks and Encino.

Koretz, who will be termed out next year, said he is pleased with the changes and plans to meet with as many constituents as possible in the new neighborhoods in the coming weeks. Koretz said he is particularly excited about representing Hancock Park and the Miracle Mile, with its many cultural institutions and attractions.

“[The district includes] some amazing facilities which I wish I had the chance to represent for more than another 11 months. We’re adding Park La Brea, Pan Pacific Park, the L.A. Museum of the Holocaust, The Grove, Television City and the Farmers Market. It’s really a dream district,” Koretz said. “I am sad that my time is up but happy we’ve made this an amazing district. I am honored to get to represent it, although for just a year.”

O’Farrell said he is eager to get started representing new areas in the 13th District.

“My team and I are excited to continue our service to all the constituents of the 13th District, including new residents I now have the honor of representing,” O’Farrell said. “In the Greater Wilshire area, we warmly welcome Larchmont Village, Windsor Square, St. Andrews Square, Ridgewood-Wilton, Western-Wilton, and Oakwood-Maplewood-St. Andrews, whose dedicated and active stakeholders make these neighborhoods amazing places to live and do business. My team and I will be ready to work with and represent you on Day One. Let’s get to work.”

Many people in the local community are also pleased with the new boundaries, which go into effect on Jan. 1.

“I think it’s a win-win,” said Cindy Chvatal-Keane, president of the Hancock Park Homeowners Association. “We are delighted with the outcome. I think it’s a positive change.”

The Hancock Park Homeowners Association plans to hold a virtual “meet-and-greet” with Koretz and his staff on Jan. 13. A link to the Zoom meeting will be available next week at hancockparkhomeownersassociation.org.

Conrad Starr, president of the Greater Wilshire Neighborhood Council, said it was the council’s preference to be located in one district, but it was split between the 5th and 13 districts. He said the council was already partly in the 5th District and has relationships with Koretz and his staff. Starr added that representatives of the 13th District have already reached out to create new ties.

“As a neighborhood council, we don’t waste any time getting to know our electeds and bringing their field deputies into the fold,” Starr said. “We are very encouraged by what we feel is going to be a very positive and proactive relationship going forward.”

Other neighborhood representatives said they were initially concerned about the new boundaries but remain optimistic about being represented by new council members.

“We were disappointed because we spent the last year building a very strong and productive relationship with Nithya Raman’s office,” said Robert Shore, president of the Park La Brea Residents Association. “That being said, we are looking forward to building the same relationship with Councilmember Koretz, and his successor, after the next election. That relationship has already gotten off to a good start.”