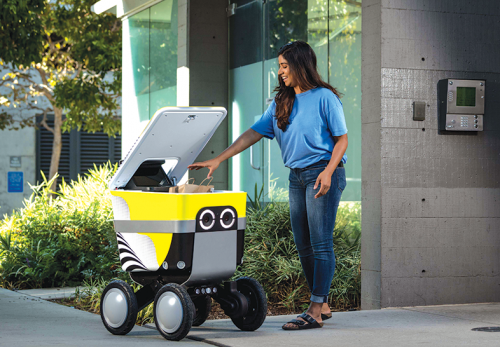 When West Hollywood residents order a delivery, they may soon open their doors to a robot instead of a human being.

The City Council on Dec. 6 approved the expansion of a pilot program to allow more personal delivery devices – which allow food and personal items to be delivered to a resident’s home via a robot – to be deployed throughout the city.

In March of 2020, the City Council approved a three-month pilot program to test personal delivery devices by Postmates. The program was launched in December 2020, but was put on hold in January 2021 after Postmates was acquired by Uber Technologies.

The project resumed in August 2021 with the independent company Serve Robotics, which was founded as the robotics division of Postmates. During the pilot, three personal delivery devices were used throughout West Hollywood.

With the three devices, Serve Robotics completed 569 deliveries, covering a total of 476 miles, according to a staff report. On average, the personal delivery devices traveled 0.8 miles, for a total of 34 minutes per delivery.

The trips recorded equate to approximately 91 cars removed from the street and a reduction of 196 kilograms of carbon dioxide emissions, according to a Serve Robotics report.

“We’ve tested three for just proof of concept to make sure that they do what they’re supposed to do, and we’ve had zero incidents,” senior transportation planner Bobby Cheung said. “So, we’re confident that these can operate safely.”

Staff will now extend the program for an additional year. Under the extension, more vendors will be able to participate in the program.

Some companies offer devices that are piloted by a remote driver, while others offer self-driving robots. The devices stay locked throughout the trip and can only be opened by the person who placed the order.

Per the program’s guidelines, personal delivery devices are limited to a maximum weight of 220 pounds and a maximum speed of 10 mph. The use of devices on substandard sidewalks, including along Fountain Avenue and Romaine Street, is prohibited.

During Serve Robotics’ pilot, the company noted opportunities to improve the city’s sidewalk infrastructure. In its report, the company flagged 14 intersections with at least one missing curb cutout and six sidewalks in need of repair, including walkways along Ogden Drive and Alfred Street.

Throughout the three-month pilot, the Serve Robotics devices were operated with a chaperone alongside them. The extended pilot would allow the devices to operate without a chaperone.

Mayor Lauren Meister, the sole council member to vote against the pilot expansion, questioned why the city was jumping from three devices to 40, rather than increasing to 10 or 15 devices.

“How are we going to control 40 of these robots with several different vendors when we still are not quite in a safe place yet with scooters and e-bikes that are on our sidewalks?” she said.

Though the pilot had no reported incidents, in the event of one, operators will have a maximum response time of 25 minutes, according to a staff report. Throughout the pilot, operators will provide a monthly update to city staff so the program and the number of personal delivery devices can be adjusted as needed, Cheung said.

“We don’t have any case studies or history from other cities to follow, so this is going to be a trial-and-error thing,” he said. “So, we want to start with 40, and if we’re getting a lot of complaints, we can scale that back down to 30, or whatever that number may be. But if things are going really well, we may increase that to 50 or 60.”

Additionally, the hours of the pilot program will be extended to allow service between 8 a.m. and 10 p.m. The three-month pilot hours ended at 6 p.m., but Cheung said staff would now like to test the program’s viability during dinner service.

The city will now call for applications from other vendors to see what other companies may be able to provide additional service within West Hollywood. One company that has already expressed interest is Coco, which currently operates in nine L.A. neighborhoods, including Santa Monica, Fairfax, Greater Wilshire, Mid-City and Los Feliz.

Carl Hansen, head of government and community relations for Coco, said the personal delivery devices offer many benefits, including cost-savings for businesses and reduced pollution.

“Residents love us because we’re taking cars off the road, reducing CO2 emissions and other forms of pollution, and we’re also providing a kind of contact-free form of delivery for people that are concerned about exposure to COVID,” he said.