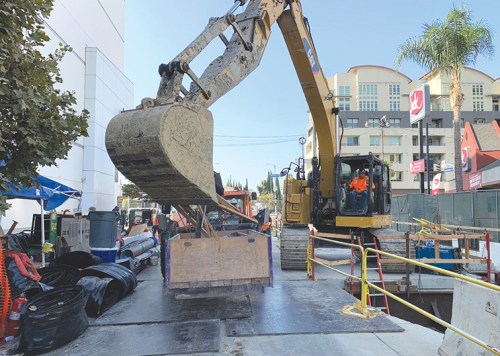 Work on the subway station at Wilshire/La Brea is occurring on Sycamore Avenue, just north of Wilshire Boulevard. (photo courtesy of Metro)

Work will remain ongoing throughout the project on all other days from the Wilshire/Western to Westwood/VA Hospital subway stations. Crews are moving underground infrastructure and conducting piling work that are precursors to station construction and tunneling at the western end of the project in Westwood. Subway construction is also ongoing at and around the Century City/Constellation station. Twin tunneling machines are excavating eastbound under Beverly Hills on the way to the Wilshire/La Cienega subway station. In Beverly Hills, work is ongoing 24 hours at and around the Wilshire/Rodeo station.

To accommodate construction, lane reductions are necessary on Wilshire Boulevard in Beverly Hills. Three lanes of Wilshire Boulevard will remain open through Jan. 1 between El Camino and Crescent drives from 7-9 a.m. and 4-10 p.m., Monday through Thursday. Wilshire Boulevard may be reduced to one lane in each direction in the area from 10 p.m. to 7 a.m., Sunday through Thursday. Traffic control may also be implemented on Beverly Drive, which will remain open with two lanes in each direction from 7-9 a.m. and 4-10 p.m.

Subsurface investigation work will also be ongoing underneath Wilshire Boulevard between Stanley Drive and Le Doux Road in Beverly Hills. The work is anticipated to last through mid-January.

At the future Wilshire/La Cienega, Wilshire/Fairfax and Wilshire/La Brea subway stations, crews are building passageways and rooms known as appendages adjacent to the main station boxes. Lane closures have been implemented on Wilshire Boulevard through April 15 between San Diego Way and Spaulding Avenue. A K-rail work zone at the southwest corner of Wilshire Boulevard and Fairfax Avenue is also being used for underground appendage construction.

At Wilshire/La Brea, appendage construction is also ongoing through March 31, 2022. Wilshire Boulevard will be reduced to two lanes in each direction between Orange Drive and Detroit Street through the first quarter of next year. Work is also occurring on Sycamore Avenue north of Wilshire Boulevard.