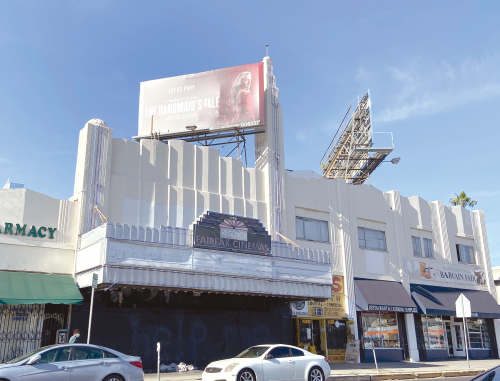 The long-vacant Fairfax Theatre has been granted historic-cultural status by the city of Los Angeles. (photo by Edwin Folven)

The Los Angeles City Council on Dec. 7 approved historic-cultural monument status for the Fairfax Theatre, which has remained vacant for more than a decade on Beverly Boulevard, just west of Fairfax Avenue.

Preservationist Steven Luftman, who filed the application for historic status with the city, was pleased the City Council agreed that the theater building is historic. Luftman conducted extensive research into the site and discovered the 1932 building was once at the center of Los Angeles’ Jewish community. Neighborhood meetings, religious services and special events were held at the theater in the 1930s at a time when the first synagogues were being built in the neighborhood, he said. Some of the information, including old articles about the theater published in the B’nai B’rith Messenger, only recently became available to the public, Luftman added.

“When I submitted the report, I felt pretty confident that it would go through,” Luftman said. “But certainly, many times afterward, I didn’t know.”

The building’s owner, B&F Associates, has city approval to build a 71-unit housing complex at the site, and the entitlements last through 2024. Despite the building receiving historic-cultural monument status from the city, the owner can complete the project without further review. However, the entitlements require that the marquee and Art Deco spire on the theater’s facade be preserved in the housing project.

The City Council’s approval would be a factor if the owner decides to build a different project or sells the property to another owner and they attempt to develop the building. If that happens, an environmental impact report would be required, as well as a new city planning department review. An inquiry to attorney William Delvac, who represents the owner, were not answered. It is unclear when the housing project may go forward or what the future holds for the building.

Preservationists previously tried in 2010 to get the theater designated as historic, but the Los Angeles Cultural Heritage Commission denied the application submitted by a group called Friends of the Fairfax Theatre. At the time, the commission voted against the designation based on the auditorium having been divided, and that there was little information about the building’s history in the application. Luftman said the difference this time was the new information about its history that he uncovered through research.

Adrian Scott Fine, senior director of advocacy for the Los Angeles Conservancy, said the Fairfax Theatre deserved historic-cultural monument status. Now that it has been approved, the building will be added to the city’s list of monuments and information will be available on the conservancy’s website.

“We are very excited to see this go through and to get this recognition for the Fairfax Theatre. It’s been a long time coming,” Fine said. “They uncovered a whole new aspect of Jewish heritage in Los Angeles and this designation sheds some light on that.”

Los Angeles City Councilman Paul Koretz, 5th District, supported historic-cultural monument status for the theater and said he agreed that it is important to the history of the neighborhood.

“The Fairfax Theater is remarkably historic. We were not able to save it as a theater when it first came up for development. So, in the development agreement, 10 or 12 years ago, we had them commit to restoring the facade of the theater and the building so that it would be returned to the condition it was in when it was first built,” Koretz said. “If the current owners of that property don’t actually move forward with a development, which they’ve sat on for many years, they’ll lose their ability to develop this property. If they sell it to someone else five years from now and they want to develop it, they’ll find that they can’t because it’s historically protected. People shouldn’t be under any illusion that this necessarily saves the theater. It just gives us an option for the future should the current developer continue not to move forward.”

Koretz said he does not know what the owner plans to do with the property, but floated the idea that it could be sold and repurposed. Koretz said while it’s only an idea, it’s something that should be considered.

“If it’s historically preserved, if the interior was not gutted and developed and we were able to facilitate it happening, it would be perfect for Television City, diagonally across the street, to have its own historic theater that people could come to for screenings,” Koretz said. “I can’t imagine anything that would be more perfect. They’re putting a true fortune into updating the filming-related facilities on that property. As far as I’m concerned, it would be the cherry on top to have a beautifully renovated historic theater to add on to all the history that’s already present at Television City.”

Luftman also said he hopes the theater’s owner will re-consider plans to develop the building into housing. He said the property would make a great place to show movies again, or for use as a performing arts center.

“I think it’s still going to be a journey,” Luftman added. “We are committed to trying to work with [the owner] to try to find a preservation solution, but that’s going to be a process.”