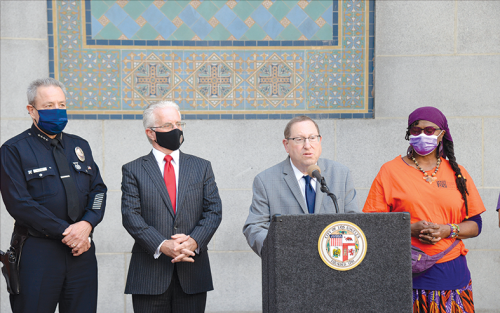 The Los Angeles City Council unanimously approved an ordinance on Nov. 30 prohibiting the possession, purchase, sale, receipt and transportation of ghost guns, which are non-serialized firearms.

The ordinance was based on a motion co-introduced in August by Los Angeles City Councilmen Paul Koretz, 5th District, and Paul Krekorian, 2nd District. It is intended to address an increase in shootings and gun-related homicides in Los Angeles, and a surge in the number of ghost guns being recovered in the field by police officers.

“The criminal underground has long relied on stolen weapons with filed-off serial numbers, but ghost guns represent a digital-age upgrade, and they are especially prevalent in states with strict firearm laws,” Koretz said. “These guns, and the industry that produces them, have flourished because of a loophole in federal and state regulations. With such staggering numbers and the sharp increase in hate crimes, we cannot turn a blind eye on a backdoor where those who would not otherwise qualify for registered guns can get their hands on an untraceable one.”

“The city of Los Angeles took decisive action to prohibit the possession and sale of guns that are specifically designed to avoid tracing, and when sold without background checks, end up in the possession of felons,” added Krekorian, who earlier this year sponsored a motion enabling the city to file a lawsuit against Nevada-based Polymer 80, one of the country’s largest online sellers of ghost gun kits. “With passage of this ordinance, law enforcement has the authority to move aggressively and swiftly to curb the spread of weapons that have played a significant role in the recent rise in violent crime across our city.”

In addition to non-serialized firearms, the ordinance prohibits unfinished firearm frames, receivers and parts without serial numbers that can be assembled into functional guns. Penalties will be misdemeanors punishable by up to six months in jail and a $1,000 fine.

“We are appreciative and grateful to the City Council and the members who worked on this ordinance which gives the LAPD another tool to reduce violence and provide a safer environment for Angelenos,” Los Angeles Police Department Chief Michel Moore said. “Year to date, there have been 24 murders, eight attempted murders, 20 robberies and 60 assaults with a deadly weapon that have been attributed to individuals with ghost guns. This is a substantial increase from last year. We stand committed to working with our elected officials to reduce the atrocious violence that stems from the illegal use of those guns.”

The ordinance was praised by anti-gun violence advocates as an important measure to protect public safety. Advocates gathered with city officials at City Hall after the ordinance was approved.

“The proliferation of ghost guns is an existential threat to public safety. These unregulated, untraceable and fully functioning firearms undermine all existing gun laws in our state [and] we cannot allow them to continue to proliferate in our communities,” Brady Los Angeles President Suzanne Verge said.

“The rise of ghost guns is a real and deadly threat. Across the nation and in our own neighborhoods, we have seen ghost guns used in mass shootings, school shootings, killings of law enforcement, community violence and domestic violence,” added Margot Bennett, executive director of WoMen Against Gun Violence. “We applaud Councilmembers Koretz and Krekorian for all their gun violence prevention efforts, both in the past and now with this ban on ghost guns.”

The ordinance goes into effect in 30 days.