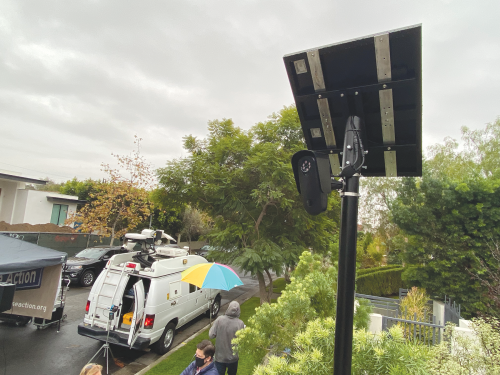 One of the first cameras installed in the Melrose District by Melrose Action was unveiled on Dec. 7. (photo by Edwin Folven)

With a surge in crime continuing citywide, residents in the Melrose District are getting directly involved in increasing public safety by installing license plate-reading security cameras in partnership with the city and the Los Angeles Police Department.

The cameras are intended to capture video footage of crimes and the license plate numbers of vehicles driven by suspects. The locations of many cameras will remain unspecified, said Peter Nichols, co-founder of Melrose Action, which spearheaded the camera program.

“We don’t want to give the bad guys too much information,” Nichols said. “They will be strategically placed where crime has been occurring the most.”

“The Melrose area has seen some troubling moments over the course of the past year,” Koretz said. “I’m proud to see our community and our residents and business owners band together with my office to create this meaningful change. This is an unprecedented example of what we can achieve when we work together to find unique and forward thinking solutions.”

Melrose Action has raised just over $30,000 for the cameras, including the $10,000 provided by Koretz and $10,000 donated by Moti Gamburd, CEO of Raya’s Paradise, a boutique residential care community for seniors with locations in the Melrose District and West Hollywood. The remainder of the funds were generated through a GoFundMe campaign. The goal is to raise $35,000 to expand the program further, and people can still donate by visiting  gofundme.com/melroseaction, Nichols said.

“I ask that community members all over Los Angeles get into action against violence and crimes,” he added. “That’s our message here [with what] we’re doing in the Melrose District. We cannot allow what some want us to believe has normalized the abnormal, succeed. There’s too much at stake, and if we all give in and give up, we all know what the results of that will be.”

Gamburd said previously he was happy to help by making the $10,000 donation.

“It’s gotten to the point where people don’t feel safe. It never used to be like that,” Gamburd said. “A neighbor came to me and told me about the cameras, and I said, ‘I’ll give them $10,000. Let’s do anything we can to improve the community and keep people safe.’ I thought it would be good for the community, good for me and good for my neighbors.”

Melrose Action contracted with the company Flock Safety on the camera project. Flock Safety’s vice president of marketing Josh Thomas said the cameras record footage that is routed to Melrose Action, which in turn shares it with the LAPD. The cameras’ ability to record license plate numbers will be helpful in tracking down suspects, LAPD officials said.

“We are so thankful for the participation of the community in partnership with the Los Angeles Police Department, Council member Koretz, Melrose Action and the Melrose BID for not only providing monetary support, but their support being our eyes and ears and having these cameras installed,” said Capt. Sonia Monico, commanding officer of the LAPD’s Wilshire Division. “Video has been instrumental in solving a lot of our cases. The Los Angeles Police Department is very appreciative of all the action of the community and the leaders in the area to assist us in reducing our crime numbers.”

Monico said the cameras will be a component of a larger effort to keep the Melrose District safe. She said many different police units have been deployed in the area since late last summer to reduce crime, including vehicle, bicycle and foot patrols, as well as undercover operations and the LAPD’s Mounted Unit, which patrols on horseback. She said no robberies were reported in the Melrose District during the past week.

Nichols added that it appears the additional police presence is paying off in keeping the community safe and he hopes it continues. More of the cameras will be installed throughout the area in the coming weeks.

Pierson Blaetz, a board member of the Melrose Business Improvement District and co-founder of the Greenway Arts Alliance and Melrose Trading Post at Fairfax High School, said he believes the cameras will improve safety.

“For me, it’s one more tool we can use,” Blaetz said. “And, it helps me follow through on a promise that I make to the families who are coming here, that they are coming to a safe place.”

Proposal gets (green) thumbs down