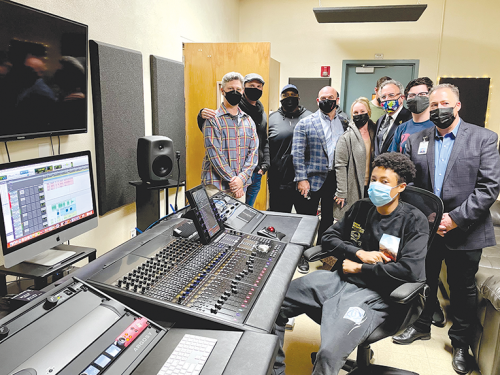 Less than a week after the high school cut the ribbon on the new space, the M.I.C. All Stars on Dec. 14 released the song on SoundCloud. Teacher Alex Breitman said the release of “It’s Christmas” is huge for the students and the center.

The students describe their new song as having “sultry piano chords and progression” with jazz influences on “full display.” Student Rowan Maida sings the hook.

“It’s Christmas” is just a sample of what Beverly Hills students will be capable of in the coming years, Breitman said. They have a new recording studio and numerous tools at their disposal. A Sing for Hope piano, an electronic drum set and a “bunch” of new keyboards are among the new pieces of equipment.

The music center became accessible to students at BHHS and district elementary schools this year, but work continued on the space through the fall. It officially opened during the ribbon cutting ceremony on Dec. 8.

Breitman said the center is still a work in progress, but he is excited for the second half of the school year.

“This is like the beginning for [the center],” he said. “I feel like now we have all our ducks in a row … [but] it’s still going to be a long process.”

The center is a stark contrast from where the program started six or seven years ago – mostly as an afterschool program. Like the tracks the students create, the audio production curriculum at Beverly Hills High School has been put together piece by piece. 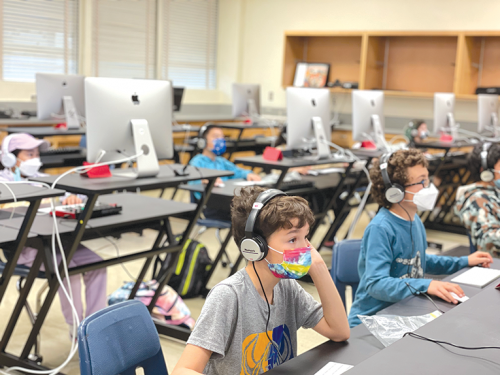 Students from fourth grade and up will learn audio production at the new music industry center. (photo courtesy of the BHUSD)

It began as a conversation between Breitman and one of his students, Bradley Mitchell, in a math class. Breitman casually mentioned he had released an extended play record, and Mitchell suggested that Breitman speak with her father, Rodney Mitchell, a fellow teacher at BHHS.

Breitman, who had been a DJ for a radio show in college, invited Mitchell to his studio. They collaborated on some music, and Rodney Mitchell later suggested that they pitch the idea for an audio production class.

It took a few years, but the Beverly Hills Unified School District approved the coursework. Then, career education coordinator Cindy Dubin got involved.

“She instantly saw the potential in the program and fully supported it,” Breitman said. “She’s kind of the driving force behind it.”

At the time, the program’s instruments consisted of computers and a couple of keyboards, he said. Dubin began applying for grants and seeking sponsors. A $50,000 donation by Libow, a realtor, philanthropist and BHHS alum, was key, Dubin said.

Dubin said the audio recording coursework is part of a career readiness program at BHHS.

“The idea of career tech education also is that the students learn on state-of-the-art equipment so that when they go get jobs, whether it’s after high school, college or beyond, hopefully they’ve been trained on some of the best equipment,” she said.

Students have definitely taken an interest. At the beginning of the school year, the program had more students than it had desks and computers, Breitman said.

However, the teachers and students had a lot of software to install and update, and work continued on the recording studio. Now, the center is primed to be a creative outlet for Beverly Hills students – from fourth grade on, Breitman said.

“This is going to be, hopefully, like a blueprint for other schools and school districts,” he added. “This is something that’s not going to be going away or changing. If anything, it’s just going to keep growing as a real option, an interest for students in high schools.”

To hear “It’s Christmas” by the M.I.C. All Stars, visit soundcloud.com/musicindustrycenter.