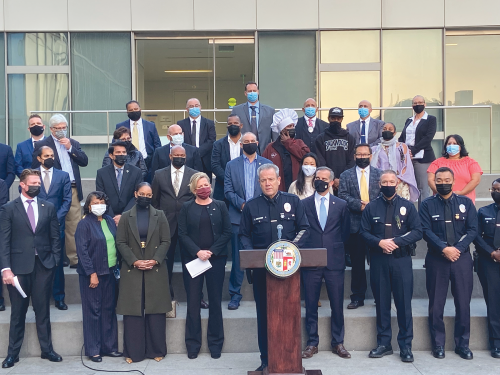 The Los Angeles Police Department is making progress in curtailing a recent series of smash-and-grab robberies at stores and shopping malls in different parts of the city.

LAPD Chief Michel Moore and Los Angeles Mayor Eric Garcetti gathered with business leaders at LAPD headquarters on Dec. 2 to announce that 14 arrests have been made in connection with robberies that occurred from Nov. 18-28. He said 11 smash-and-grab robberies were committed during the period by large groups called flash mobs that break into or swarm inside stores and loot merchandise before quickly fleeing. Approximately $338,000 in merchandise was stolen during the robberies, and the suspects caused more than $40,000 in property damage, Moore added.

“[We want to] communicate clearly the message, which is a message of prevention, a message of not allowing or tolerating this type of bold and reckless action with these burglaries and robberies, and that there are consequences for those individuals who attempt to engage in that type of conduct,” Moore said.

Six of the smash-and-grab robberies occurred in the LAPD’s Wilshire Division, including two at the Nordstrom department store at The Grove on Nov. 22. The first was committed in the afternoon by a group of suspects who entered the store and stole merchandise valued at $9,000, Moore said. Police are still searching for those suspects.

Later that evening, a large group smashed a window at the Nordstrom store and stole $100,000 in merchandise, Moore said. Three male suspects – two adults and one juvenile – were arrested after a police pursuit from the robbery scene to South Los Angeles. That robbery involved approximately 20 people and additional suspects are still being sought.

A spokeswoman for The Grove said additional security measures are in place including custom-fabricated protective barriers at all entrances overnight, additional guards and off-duty law enforcement personnel stationed onsite, ballistic film to strengthen all storefront windows, and state-of-the-art closed circuit television and alarm systems throughout the property.

Moore outlined details of some of the other robberies, including two that occurred on Nov. 18 and Nov. 26 at the Ksubi clothing store at 132 S. La Brea Ave. Police are searching for the suspects in the first robbery and arrested one male suspect after the second crime, Moore said.

Authorities are still searching for a group of suspects who entered the Impossible Kicks shoe store in the Beverly Center on Nov. 24 and stole $23,000 in merchandise. Three suspects were arrested after a robbery at Wasteland Clothing at 7428 Melrose Ave. on Nov. 26, Moore added. The other smash-and-grab robberies occurred in the San Fernando Valley and South Los Angeles.

Moore said the crimes are being committed by different groups of young people who may be organizing through social media. All of the suspects arrested for the smash-and-grab robberies have been released from custody under the state’s current zero-bail system in which suspects arrested for most non-violent crimes are immediately released after booking pending future court appearances. The policy was implemented during the COVID-19 pandemic to keep jail populations low and limit outbreaks, but Moore said it may be emboldening some people to commit crimes. He stressed that the department plans to vigorously pursue prosecution in the cases. FBI officials said at the press conference that federal authorities will prosecute cases when applicable.

Moore added that the suspects are stealing items to sell them and he said members of the public can take a stand by not purchasing merchandise from people on the street or anywhere else if they suspect it is stolen. He said the LAPD will have a heightened presence at malls and shopping districts during the holiday season to prevent crime.

“To our public, our shopping centers, our retailers, our city areas are safe,” Moore added.

Anyone who witnesses a smash-and-grab robbery is urged to call 911. Anyone with information about the recent smash-and-grab robberies is urged to call the LAPD at (877)ASKLAPD or (877)LAPD247. Rewards from $1,000-$10,000 are available. People can also report tips anonymously to Crimestoppers by calling (800)222-TIPS, or visiting lacrimestoppers.org.